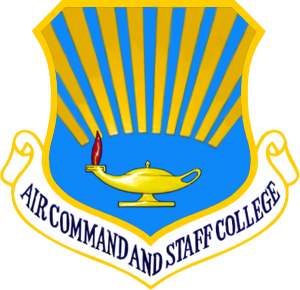 Air Command and Staff College (ACSC), the Air Force’s intermediate professional military education (PME) school, prepares field grade officers of all services (primarily majors and major selects), international officers, and US civilians to assume positions of higher responsibility within the military and other government arenas. Geared toward teaching the skills necessary for air and space operations in support of a joint campaign as well as leadership and command, ACSC focuses on shaping and molding tomorrow’s leaders and commanders. The college’s academic environment stimulates and encourages free expression of ideas as well as independent, analytical, and creative thinking.

ACSC traces its roots to the Air Corps Tactical School (ACTS) located at Maxwell Field from 1931 to 1942. After World War II, as the independent Air Force was formed, grew, and developed, the requirements and expectations of the school evolved to fulfill the service’s educational needs. The vision of pre-World War II leaders has withstood the test of time. Although almost eight decades have passed since the founding of the ACTS, the present 10-month curriculum still focuses on expanding understanding of air and space power and on the growth of midcareer officers. In 1962, the school became known by its current name, Air Command and Staff College.

During academic year 1994, ACSC undertook the most significant change to its educational program since the school’s inception. The school transitioned from a lecture-based to a seminar-centered, active environment with an integrated curriculum geared to problem solving across the continuum from peace to war. In academic year 1999, ACSC began efforts to align its curriculum under the Air University commander’s Strategic Guidance for the Continuum of Education. The ACSC program now functions as a portion of a comprehensive and integrated career-long professional military education program.

The ACSC curriculum encourages the development of higher order thinking by challenging students to think critically and exercise a combination of analytical and practical tools required as leaders charged with the nation’s defense. ACSC graduates are well educated in the profession of arms with emphasis on the use of air and space power in joint campaign planning and the operational art of war.