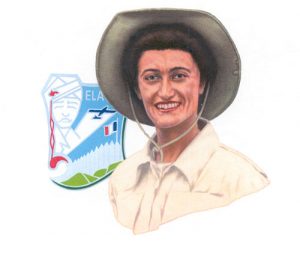 Valérie André was the first female general officer in the air force of France. Born in 1922, as a youth, she lived in Alsace near the Rhein River and border with Germany. She was fascinated by airplanes and had her first flight in a Potez 58 monoplane. In 1939, fearing a German invasion, her father moved the family to central France. During World War II, André attended university in Paris and, in 1948, became a doctor. In 1949, she volunteered to serve in Indochina and was first assigned to a hospital at My Tho, a small city in the Mekong River delta. In May 1950, her unit received two Hiller 360 helicopters and she went to France and checked-out in the type. After six months, she returned to Saigon and became assistant for brain surgery at Hospital Coste.

Flying the Hiller 360s, she completed 129 missions and evacuated 165 wounded soldiers. Once, she even parachuted into a remote outpost in Laos to provide medical attention to soldiers. After over three years in Indochina, she went to the air force flight test center at Brétigny, near Paris. At the Center for Flight Medicine, André flew many helicopters including the French-built Sud Est Alouette II, Sud Aviation Alouette III, and the Sud-Ouest Djinn, and the American-built Bell OH-47 and Sikorsky S-58. From 1959 to 1962, she served as chief doctor of a helicopter squadron and flew 356 missions during the war in Algeria. André married the air force’s first helicopter pilot, Alexis Santini, in 1963. In the 1970s, she was Chief of the Medical Division at Villacoublay, a base near Versailles, and later served as technical consultant in the transport command. André made history in 1976 when she became the first woman in the French military to reach flag rank.

Next, she became Chief of the Medical Division of the Fourth Air Region. In 1980, she returned to Villacoublay in the Second Air Region and was promoted to Lieutenant General. The next year, President Mitterand of France presented the Republic’s highest military award, when he named André, “Grand Officer de la L égion d’Honneur.” In a pioneering career, she has received numerous awards that include: “Médaille de l’Aéronautique,” the “Médaille du Service de Sante,” the “L égion de Mérite,” the “Vietnamese National Decoration, ” the “Croix de la Vaillance,” the “Médaille du Combattant Volontaire,”and the “Grande Médaille d’Or de l’A éro-club de France.” André has logged 4,200 hours in the air, including combat service from the jungles of Southeast Asia to the mountains of North Africa. On 18 April 2000, she received the “Grand Croix” to the “Légion d’Honneur.” André’s service equals many of France’s greatest military officers! Now retired, she lives on a hill overlooking Paris and the River Seine.

In May 1950, the first medical evacuation helicopters arrived in Indochina. The Indochina Health Service acquired two Hiller 360s and placed them at the disposal of the ArmÃ©e de l'Air. Crewed by military personnel, the two helicopters proved the extraordinary value of rotary-wing aircraft in the hard-fought guerilla war waged by the Viet Minh. Captain ValÃ©rie AndrÃ© and other courageous crews flew countless missions. Their efforts led to purchase of heavier-lift helicopters in 1952 and saved the lives of many wounded soldiers.