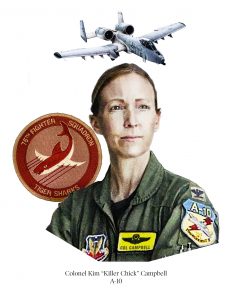 Colonel Kim N. Campbell was born in Honolulu, Hawaii. At a very young age, she had a strong passion for wanting to fly and at 12 years old, she aspired to make her dream a reality and joined the Civil Air Patrol. By the age of 16, she had accomplished her first solo flight. She continued to pursue her dream by earning a pilot billet when she graduated at the top of her class at the United States Air Force Academy in 1997. She eventually became an A-10 instructor and flight commander while stationed at Pope Air Force Base (AFB) in Fayetteville, North Carolina. In 2003, Col Campbell was deployed to the Middle East in support of Operation Iraqi Freedom. At the outset of the conflict, her unit, the 75th Fighter Squadron, flew missions providing close-air-support (CAS). On April 7, 2003, Col Campbell flew in a two-ship with her wingman. They launched to provide CAS for troops in contact in downtown Baghdad. They flew several passes over the city trying to locate the target. Due to cloud cover, they were forced to fly at a lower altitude, exposing them to anti-aircraft artillery (AAA) fire. After providing support on her last pass, Col Campbell was directly hit by AAA. For over an hour, she maneuvered her A-10 in manual reversion mode as her hydraulics failed after the initial hit. There are few instances in A-10 history where manual reversion mode is utilized and even fewer where the pilot successfully landed the aircraft and survived. During the nearly 60-minute ordeal, Col Campbell was able to pilot her aircraft back to base with the support of her wingman. After safely and successfully landing her A-10, a quick walk-around the aircraft left everyone in amazement at how severely damaged it was and yet able to fly. For her bravery and heroic actions, Col Campbell was awarded the Distinguished Flying Cross. Col Campbell followed her already distinguished and accomplished career with highly selective assignments. She became an A-10C operational test pilot and division commander while stationed at Nellis AFB in Las Vegas, Nevada. In 2016, Col Campbell became the commander for the 612th Theater Operations Group and 474th Air Expeditionary Group at Davis-Monthan AFB. Her career has brought her full circle as she currently serves as the Chair of Airpower Innovation and Integration in the Department of Military and Strategic Studies at the United States Air Force Academy in Colorado Springs, Colorado.