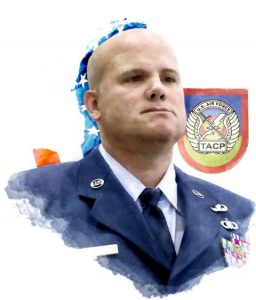 Selected for his valor and gallantry in combat, SMSgt Thomas E. Case is one of three Airmen since 9/11 to receive two Silver Stars, the nation’s third highest award, twice for valor and gallantry in combat while supporting ground force operations in Iraq in 2003 and Afghanistan in 2009. SMSgt Case had deployed sixteen times in support of Operation Iraqi Freedom, Operations Enduring Freedom as well as other unspecified operational locations.  In March of 2003 he was deployed as a Joint Terminal Attack Controller (JTAC) in support of Bravo Company 3d Ranger Battalion in western Iraq near the Haditha Dam.  His unit came under heavy direct and indirect fire from the enemy. SMSgt Case quickly began directing air strikes simultaneously engaging the enemy in close combat.  From 31 March 2003 to 05 April 2003 SMSgt Case continued to direct air support, controlling up to fourteen aircraft, refusing to be relieved until their objective was secure. In July of 2009 he was deploy again as a JTAC in support of Joint Special Operations Command.  On 16 Jul 2009 he was supporting a Ranger Company on a night time mission in the Khowst-Gardez Pass in Afghanistan when they came under heavy enemy fire.  SMSgt Case employed close air support from supporting aircraft, exposing himself to the enemy to ensure the danger close airstrike he was requesting hit the correct target. He continued to assess the enemy and their position continuously exposing himself to direct effective airstrikes and defeat the enemy. He did all this while engaging in close combat with the enemy and overcoming issues with damaged equipment to ensure the safety of his unit.