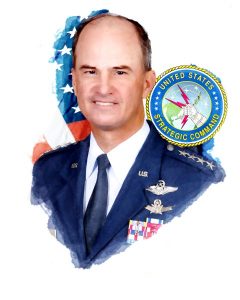 General Kevin P. Chilton dedicated 34.5 years to the United States Air Force.  He retired from his last assignment as the Commander, U.S. Strategic Command, Offutt Air Force Base, Nebraska, where he was responsible for the plans and operations for all U.S. forces conducting strategic deterrence and Department of Defense space and cyberspace operations. General Chilton is known for his strong leadership skills and dedication to the people he works with. General Chilton is a distinguished graduate of the U.S. Air Force Academy and a Columbia University Guggenheim Fellow.  A distinguished graduate from the U.S. Air Force pilot training and test pilot Schools, he flew operational assignments in the RF-4C and F-15 and weapons testing in the F-4 and F-15. The general also served 11 years at the National Aeronautics and Space Administration and commanded STS-76, his third space shuttle mission. The general has commanded at the wing, numbered air force, major command and unified combatant command levels.