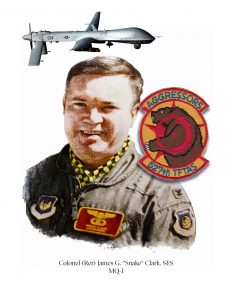 James G. (Snake) Clark, born in Carney, New Jersey, is a 1973 graduate of the Catholic University of America Air Force Reserve Officer Training Corps (AFROTC) and who served as a USAF officer and F-4 pilot, retiring at the rank of colonel in 2001. He has been described as one of the most colorful, innovative, and risk-taking U.S. Air Force (USAF) warfighters in the service’s 70-year history. He currently serves in the Senior Executive Service. In a career spanning five decades, he enabled numerous tactical and strategic capabilities which shaped our modern-day USAF. His work includes building and standup of the Warrior Preparation Center (WPC) – the world’s premier wargaming, modeling, and simulation center. Leading the USAF’s first mission planning division, his implementation of a system program office and shrewd identification and canceling of systems that did not work led to operational success for its first use in support of Operation EL DORADO CANYON. His leadership as USAF Director of Intelligence, Surveillance and Reconnaissance (ISR) Modernization and Infrastructure capitalized on his skills as one of the Defense Department’s leading experts in the fields of mission planning, commercial imagery, unmanned aerial vehicle (UAV) applications, computer modeling and simulations and as the inventor of EAGLE Vision. Snake forever changed airpower through his determined advocacy in the early stages of the Predator UAV/RPA platform. His efforts brought innovation that changed the calculus involved in combat operations for the USAF, sister services, allies, and perhaps our adversaries and competing powers. He is rightfully known as “The Godfather of the MQ-1 Predator.” In Snake’s own words, “The Predator was a revolution. It changed the way we think and I’m honored to be a part of this legacy.” Snake’s indispensable and unique role in the refinement, overcoming of obstacles, and ever-increasing deployment for the MQ-1 Predator’s low-risk, high impact RPA capability broadened the tools available to commanders. His efforts provided an innovative, multi-role airpower advantage at the tactical, operational, strategic, and policy levels. Pioneering and responsive, his efforts contributed to “making military innovation cool” before it really was so. His direct impact enabled the following facets of MQ-1 Predator airpower: developed the remote operations video enhanced receiver (ROVER) allowing unparalleled situational awareness on the ground in near real time, 24/7, and worldwide; gave the Predator “teeth” by managing the addition of AGM-114 Hellfire missiles; cut down the “kill chain” (Find, Fix, Track, Target, Engage, and Assess); and reduced missions of piloted aircraft in hostile areas, which saves lives and resources. His efforts on the Predator innovation team led to him being featured prominently, along with 2019 Eagle Abraham “Abe” Karem, in the 2014 book PREDATOR: The Secret Origins of The Drone Revolution by Richard Whittle. Abe Karem planted the seed of modern UAV/RPA capability worldwide. Snake Clark tended to the growth of that seed into what became the MQ-1 Predator and what follows for the future of robust airpower in RPA operations, including the current MQ-9 Reaper. As a visionary leader, he was awarded France’s highest civilian award—the French Legion of Honor, recognized as the Air Force Association (AFA) National Member of the Year, received the AFA Jimmy Doolittle Fellow Award (twice), earned the #70 for 70 Award for Innovation, and holds the Moody Suter Lifetime Achievement Award for Modeling and Simulation. He resides in the National Capital Region with his wife Cynthia, a retired USAF officer from the Judge Advocate General Corps. He has two adult children, Jennifer and Christopher Clark.