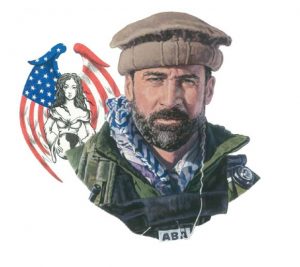 Ramon Colon-Lopez lives by the quote, “if you want to fly with the eagles, don’t hang around with the turkeys.”  Following this maxim, CMSgt Colon-Lopez has rapidly risen through the enlisted ranks.  He was born to Vilma and Ramon Colon-Torres on 21 October 1971, in Ponce, Puerto Rico.  His family moved to Connecticut where he graduated from Kolbe Cathedral High School in 1989.  After attending Sacred Heart University, he joined the Air Force as a Transportation Specialist and served during Operation DESERT STORM.  He volunteered to enter the selection training program for Air Force Special Operations Pararescueman.  As one of the thirteen individuals-out of 113 candidates-to complete the assessment process, he was assigned to the 48th Rescue Squadron at Holloman AFB, New Mexico.  His reputation for exceptional performance and dedication to duty earned him the chance to join the elite 24th Special Tactics Squadron in February of 1999.  After the September 11, 2001, terror attacks, Colon-Lopez took the fight to the enemy during four deployments in support of Operation ENDURING FREEDOM from July 2002 to September 2004.  Over the course of 60 combat missions, his decisive actions resulted in the apprehension of 30 high value targets.  He received his first Bronze Star with Valor for courage under fire while supporting the Presidential Security Detail for Hamid Karzai.  During a direct action mission, his helicopter was crippled by anti-aircraft fire originating from the target area.  After the crash landing, Colon-Lopez and two SEALs assaulted a fortified position, killed five combatants, and removed the threat to the remainder of the helicopter assault force. His second Bronze Star with Valor was for heroism displayed during that mission. Additionally, Colon-Lopez was one of the first of six individuals to receive the Air Force Combat Action Medal.  His extraordinary combat record made him the top choice to stand up the unit’s first compartmented Personal Recovery Advance Force Operations team and to revise the Joint Special Operations Command Personnal Recovery Directive.  He was hand selected to become the Superintendent of Training at the Pararescue/Combat Rescue Officer School in 2005 at Kirtland AFB, New Mexico.  In 2006 he received the Senior Noncommissioned Officer Lance P. Sijan Leadership Award.  After Kirtland, CMSgt Colon-Lopez served as the Command Chief of the 1st Special Operations Wing at Hurlburt Field from 2011 to 2012 and currently serves as the Command Chief of the 18th Wing at Kadena AB, Japan.

During the winter of 2003-2004, Ramon "CZ" Colon-Lopez was assigned to a Personal Recovery Advanced Force Operations team, traveling mostly in MH-47s, in support of Operation ENDURING FREEDOM.Â  For his service, Colon-Lopez was awarded the Bronze Star with Valor and received the first Air Force Combat Action Medal.