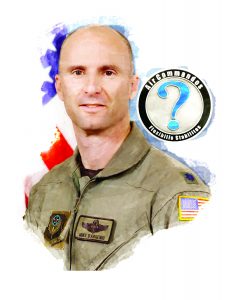 After a storied career in the AC-130U Gunship, Colonel Michael J. D’Argenio was tasked by Air Force Special Operations Command (AFSOC) to lead the fielding and deployment of the U-28A Tactical Intelligence, Surveillance, and Reconnaissance (T-ISR) platform in 2005.

Born in 1965 in Baltimore, Maryland, Col D’Argenio spent his childhood through high school in Randallstown, Maryland where he received a four-year Air Force Reserve Officer Training Corps (ROTC) scholarship. He is a 1987 graduate of The Catholic University of America with a degree in electrical engineering, achieving his commission through the ROTC program at Howard University. Assigned to Undergraduate Pilot Training at Reese Air Force Base, Texas, Col. D’Argenio flew the T-37 and T-38 leading up to earning his wings in 1989, with a follow-on assignment to fly the C-21A at Offutt Air Force Base, Nebraska. Quickly distinguishing himself as an aviator, Lieutenant D’Argenio served as both a C-21A Instructor and Evaluator while earning his In 1993 he was assigned to AFSOC and the 16th Special Operations Squadron (SOS) to fly the AC-130H Spectre Gunship at Hurlburt Field. During his time in the 16 SOS, he executed combat tours over Somalia and Bosnia. In 1995, then Captain D’Argenio was assigned to help stand-up the 4 SOS, home of the new AC-130U Spooky gunship. Serving as Chief of Tactics, he was the Aircraft Commander tasked with the armed reconnaissance mission in support of the non-combatant evacuation operation in Tirana, Albania in 1997, as well as the first combat employment of the AC-130U all weather fire control radar in Operation ALLIED FORCE in 1999.

On 11 September 2001, while serving as the Deputy Chief of Standards and Evaluation at the 1st Special Operations Group (SOG), Major D’Argenio was assigned to be the flight lead for the AC-130U 6-ship tasked to support Task Force Sword during the opening days of Operation ENDURING FREEDOM. On 19 October 2001 Major D’Argenio’s crew supported Objectives Gecko and Rhino in southern Afghanistan, a simultaneous airfield seizure and direct action at a known Taliban leader’s compound. The actions of Major D’Argenio’s crew, providing critical close air support while in the engagement zone of enemy fire, earned the recognition of the Distinguished Flying Cross. In 2002 he was tasked to serve as the Chief of Special Mission Plans for the 1st Special Operations Wing (SOW), in charge of the integration of AFSOC aviation with joint SOF units. In 2003 D’Argenio was assigned to serve as the Chief of Targeting at Joint Special Operations Command (JSOC). In early 2005 the JSOC staff recognized a shortfall in T-ISR aircraft and reached out to Special Operations Command (SOCOM), and AFSOC to solve the critical gap. In 2005 Lt Col D’Argenio was assigned command of the 319 SOS, and tasked with the rapid fielding of the U-28A Block 0 aircraft and the T-ISR mission set. Leading a joint team of Air Force and Navy aircrew, acquisitions personal, engineers, Intel officers, and contract logistics support (CLS), the 319 SOS deployed the first two aircraft in less than nine months from initial design. From 2006 to 2007 the 319 SOS grew from six to 14 aircraft, from 30 personnel to 150, and fielded the Block-10 and -20 aircraft modifications. Fostering a “mission first” mantra, where the ground force commander’s intent ruled all discussions, the U-28A quickly became a required aircraft in the stack of some of the joint community’s most critical missions. After attending Air Force War College in 2008, Colonel D’Argenio was selected as the Deputy, then Commander of a group tasked with classified missions vital to the national security of the United States. For his service at the group level, Col D’Argenio was awarded the Legion of Merit on the occasion of his retirement after 25 years of service in April 2013.

Colonel D’Argenio is a command pilot with over 7,000 hours, qualified in nine aircraft. He currently resides in Southern Pines, NC with his wife Lori, and their four children. He continues to serve the United States in the defense sector working on innovative solutions for manned and unmanned ISR technology and in the further integration of data link and sensor systems.