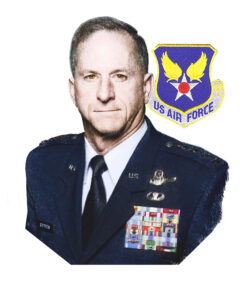 F-16 Pilot/CHIEF OF STAFF OF THE AIR FORCE

General David L. Goldfein is a Fighter Pilot and the 21st Chief of Staff of the United States Air Force. The son of an Air Force colonel, who was also a Fighter Pilot, Gen Goldfein and his two brothers grew up traveling as his family was stationed around the world. He attended the United States Air Force Academy (USAFA) and graduated with the Class of 1982 with a degree in Philosophy. During his time at the Academy, he found himself on the Dean’s other list and seized the opportunity to participate in the program called Stop Out. During that time, he proved himself to be more of a free spirit than most would expect from a future Chief of Staff. He ultimately decided to ride his bicycle across the country. It was during this ride that he reaffirmed his belief that the United States is a great country and worth protecting. Following USAFA, he married his wife Dawn, and attended pilot training at Sheppard Air Force Base. Then Lieutenant Goldfein was selected as a First Assignment Instructor Pilot in the T-38A and spent the next four years training students and working towards his goal of flying the F-16. Captain Goldfein then secured an F-16 slot as his follow-on assignment and was just in time to fight in Operation DESERT STORM. He was part of the first F-16’s to arrive in the Middle East. There as a young Captain he acted as one of the main mission planners for his squadron and was in charge of the base transportation plan. It was there that he received his call sign, Fingers. General Goldfein received invaluable combat experience during this time that shaped him for the rest of his career. He would go on to command the 555th Fighter Squadron, “Triple Nickel,” where during one night mission he would find himself ejecting over enemy territory and evading capture until his rescue. General Goldfein eventually commanded at the Group, Wing, and Component level. His career would be capped off with his selection as the 21st Chief of Staff of the Air Force where he would spend his four years focusing on his three pillars: revitalizing the squadron, joint leader development, and joint all domain command and control. Additionally, General Goldfein came to understand that flesh colored band-aids were making his Airmen mad and that the United States Air Force needed to acknowledge the blinders it had on and strive to remove them to have a system that worked for all Airmen. General Goldfein retired in August 2020 after over 37 years of service in the United States Air Force.