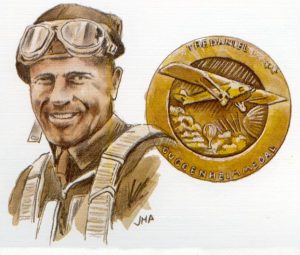 Lt. Gen James H. Doolittle was first selected by Air Command and Staff College’s Gathering of Eagles in 1982 and subsequently honored in 1982. “Jimmy” Doolittle, born in 1896, has repeatedly pushed back the frontiers of aviation technology while making his mark as a pioneer, record setter, and war hero. Caught in the excitement of World War I, he entered flight training and earned his pilot wings in early 1918. Doolittle first served as a fighter pilot instructor and then as a border patrol pilot at Eagle Pass, Texas. Soon after transitioning into DH-4s, he participated in General Billy Mitchell’s 1921 airpower test off the Virginia coast. In September 1922, he made national headlines and won the Distinguished Flying Cross for piloting a modified DH-4 for over 22 hours from Florida to San Diego, California–the first time the continent had been crossed in less than a day.

Three years later, Doolittle set two world seaplane speed records and won the 1925 Shneider Cup–the ” world series” of seaplane racing. In 1928, he helped to develop the artificial horizon and directional gyroscope–instruments necessary for flying “blind.” With these and other improvements, he made the first instrument-controlled take-off, flight, and landing. After resigning his regular army commission in 1930, he entered the Reserves and continued as an aviation pioneer while working for Shell Oil Company. In 1931, he won the first Bendix Trophy race and set a new transcontinental speed record of 11 1/4 hours in his Laird Super-Solution. The following year, he flew the powerful Gee Bee racer to gain another speed record and victory at the 1932 National Air Races.

With war on the horizon, Doolittle returned to the Army Air Corps in 1940. Following Pearl Harbor, he planned and carried out the first retaliatory strike against the Japanese mainland. On 18 April 1942, he personally led 16 B-25 bombers from the aircraft carrier Hornet and bombed Tokyo. This daring one-way mission provided a tremendous boost to American morale and won him the Medal of Honor. He later commanded the 8th, 12th, and 15th Air Forces in Europe and rose to the rank of lieutenant general–the highest ranking reserve officer in Air Force history—eventually retiring in 1959. Doolittle returned to Shell Oil and served on many top civilian and military boards and was inducted into the International Aerospace Hall of Fame.

In the black Curtiss R3C2 seaplane, General Doolittle won the 1925 Schneider Cup Race--the world's series of seaplane racing. This aircraft, which General Doolittle flew to a new seaplane record speed of 235 mph, was a forerunner of a series of famous "hawk" fighters that culminated in the P-40.

In 1928, the Daniel Guggenheim Fund was established to study flight under adverse weather conditions. With "Jimmy" Doolittle in charge of the project's Full Flight Laboratory at Long Island's Mitchel Field, a converted navy seaplane, the Consolidated Wright NY-2, was outfitted to be a "fog flying" experimental aircraft. Specially developed cockpit instruments included the Sperry artificial horizon and directional gyro, a primitive radio beacon receiver, and a Kollsman barometric altimeter. On 24 September 1929, Lieutenant "Jimmy" Doolittle took off in the weather and completed a 15-mile round trip and landed while "under the hood"--the world's first flight made solely with the aid of instruments. This historic flight led to the development of an "all-weather" capability for military and civilian aviation.