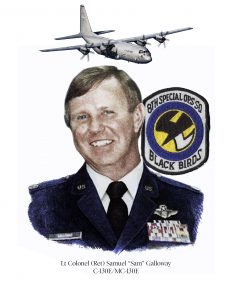 Lt Col Samuel “Sam” Galloway was born 2 June 1947 in Milan, Tennessee. He graduated from the University of Tennessee in 1969, with a Bachelor of Science in Civil Engineering; the first in his family to obtain a college degree. Galloway enlisted in the Air Force on 20 May 1970. He was commissioned a second lieutenant from Officer Training School (OTS) on 18 August 1970, and earned his navigator wings in June 1971 at Mather Air Force Base (AFB), CA. After attending survival training at Fairchild AFB, WA, he was assigned to the C-130 Replacement Training Unit (RTU) at Pope AFB, NC, in July 1971. Here he received basic C-130 high-level and tactical training before deploying to the Far East. Galloway’s first operational assignment was the 345th Tactical Airlift Squadron (TAS) at Ching Chuan Kang AB, Taiwan, in October 1971. During the two-year assignment, Galloway spent one year flying combat missions in South Vietnam. During resupply airdrops to a soccer field at An Loc, his C-130 was hit by anti-aircraft fire, but was able to return to base. Galloway received the Distinguished Flying Cross for this series of missions. On another occasion, while evacuating refugees from Kontum AB Vietnam, Galloway’s crew was forced to spend the night in bunkers when their plane was damaged on landing and subsequently destroyed by mortar fire. In October 1973, Galloway was assigned to the 50th TAS at Little Rock AFB, AR, where he upgraded to instructor navigator and trained students in the recently relocated C-130 RTU. After a little more than a year at Little Rock, Galloway received orders to the MC-130E, Combat Talon I.  He attended the training at Hurlburt Field, FL, from December 1974 until May 1975. Assigned to the 1st SOS at Kadena AB, Japan in May 1975, Galloway trained extensively for tactical operations, including airdrop, airland, and adverse weather low-level flight. In May 1979, Galloway was assigned to the 8th SOS at Hurlburt Field, where he was a navigator instructor and the assistant chief of the MC-130E schoolhouse.  After the hostages were taken in Tehran, hand-picked MC-130E crews at Hurlburt began training with night vision goggles and rehearsing for a rescue attempt. After months of training, brainstorming, and aircraft modifications, the crews deployed to the Middle East in April 1980, for Operation Eagle Claw.  The mission was flown on 24/25 April. Galloway’s lead crew located and lit runway lights on the desert landing strip, landed, and Rangers and Delta troops secured the field. During a subsequent departure, one of the helicopters impacted a C-130 and eight crewmen were killed.  As a result of this failed mission, years later US Special Operations Command was formed.  In June 1980, training and rehearsals began again, to prepare for a possible second rescue attempt. In August 1980, Galloway was selected to develop and test Credible Sport, a rocket-assisted C-130 landing and takeoff in a soccer field in Tehran.  This mission was canceled due to a landing accident by the test crew and the inauguration of President Reagan. In August 1983, Galloway was assigned as the MAC Command Flight Examiner Navigator. USSOCOM was established in May 1987. In October 1987, Galloway received an assignment to USSOCOM/J3 (Operations and Exercises).  Galloway retired from the Air Force on 1 Jun 1992. By the middle of Jun 1992, he was at the Kirtland AFB, NM, MC-130H Schoolhouse, working for Loral and Lockheed, instructing students in the classroom and simulators. Galloway retired from Lockheed in Jan 2011.