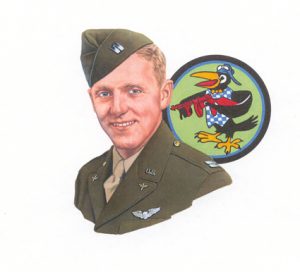 José González flew combat during World War II over the epic allied amphibious assaults on Italy, in the lonely night sky above China, and over the steaming jungles of Burma. González, whose lineage includes Cuban, Dutch, and Irish ancestors, was born in 1921 in New Jersey. He grew up in Camp Hill, Pennsylvania, where he completed high school in 1939. He went to work in a steel mill and joined an Army National Guard field artillery unit. Called to active duty in early 1941, González soon found his way into the Army Air Corps and, in the summer, was assigned to a materiel squadron at Gunter Field, Alabama. In May 1942, he entered flight training at Lakeland, Florida. After training at fields in South Carolina and Georgia, in January 1943, he earned his wings and an assignment to fly the Curtiss P-40 Warhawk.

Sent to Morocco in May, he finally entered combat over Sicily in July. Assigned to the 58th Fighter Squadron (FS), 33rd Fighter Group (FG), González supported George Patton’s forces as they raced along the island’s north coast. On one mission, his fighter was hit by ground fire and he belly landed on a beach—in a minefield! In September 1943, as allied forces went ashore on the Italian mainland at Salerno, his Warhawk was hit again—by the guns of a fellow American in a Lockheed P-38 Lightning. Bailing out, González came down in enemy-held territory.

Narrowly evading capture, he made it through allied lines and fought with the infantry as the Germans counterattacked. Soon back in the air, he flew escort for bombers pounding Monte Cassino. Over Anzio, González destroyed a German “E-boat” attacking allied landing craft. In early 1944, the 33rd FG deployed to China to escort Boeing B-29 Superfortresses. Assigned to the 60th FS at Shwangliu, he was picked to fly night intercepts in the Republic P-47 Thunderbolt . When B-29 operations from China over Japan proved impractical, the 60th FS moved to Nagaghuli, India, and flew missions to Burma. In mid-November, González, now a captain and operations officer, flew his final sortie.

On a mission over Mandalay, two armor-piercing shells wounded him. After a month in the hospital, he was airlifted to the States and in July 1945 was discharged. He entered Bucknell University and in 1949 earned a degree in English and Art. González attended drama school at Yale University and worked as a radio announcer and actor. He appeared in early live television until becoming a teacher. Later, he helped establish the Outward Bound Project, and co-founded Urban Suburban Environments (USE), an environmental education program. He was Youth Commissioner for two New Jersey Governors. Members of “the greatest generation, ” González and his wife, Betty, live near his boyhood home.

On 18 November 1944, González, with over 150 combat hours over Europe and Asia, was on a fateful mission. During a ground-attack mission against the Japanese at Mandalay, Burma, his Republic P-47 Thunderbolt was jolted by armor-piercing shells. One struck González just a fraction of an inch from his heart and another his shoulder. Bleeding and in shock, with his canopy jammed, he headed north at full throttle and found the airfield at Myitkyina. Flying under a departing transport, he miraculously landed and rolled off the runway. He had survived!