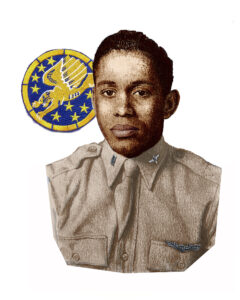 Dr. Brown is a Minneapolis native who knew in the 6th grade that he wanted to be a military pilot. After graduating from high school, he applied and was selected to report to the Tuskegee Institute’s segregated pilot training program. After training he traveled overseas to join the 332nd Fighter Group stationed in Ramitelli, Italy. The Tuskegee Airmen were extremely successful at protecting bombers, so they were referred to as the Red Tailed Angels, because of the aircraft tails were painted red. On his 30th mission, Lieutenant Brown was shot down and captured by the Germans. At age 20 he was a prisoner of war and held at a POW camp south of Nuremberg. On April 29, 1945, General George Patton arrived at the prison camp after the Germans had pulled out, liberating Allied Forces. After the war, he volunteered to attend an Electronics Officers Course where he would eventually be stationed in Japan to oversee an electronics depot supporting aircraft in the Pacific Theater. While stationed in Japan he flight tested aircraft headed to Korea for Korean War efforts. Later in his career he continued to fly different aircraft such as the B-47 and held a post at Strategic Air Command (SAC) during the Cuban Missile Crisis. After his assignment at SAC (Lockbourne AFB, Columbus Ohio) he retired as a lieutenant colonel having served his country for 23 years. He logged over 6,500 hours of flying time and flew 20 different military aircraft. About the time of his retirement, he graduated from Ohio University with his master’s degree. Shortly thereafter, he entered the education field serving as an instructor in the math department at the Columbus Technical Institute, today known as Columbus State Community College. In his first quarter with the institution, he was approached and accepted an opportunity in run the college’s electronics department as the chairman. Dr. Brown went on to earn a Ph.D., retiring from Columbus State Community College as Vice President of Academic Affairs in 1986. Following his retirement, Dr. Brown founded Brown & Associates, an educational consulting firm that he ran for 26 years until retiring at age 88. Dr. Brown is 96 years young and currently resides in Port Clinton, Ohio and was recently inducted into the Minnesota Aviation Hall of Fame. He and his wife Dr. Marsha Bordner wrote, Keep Your Airspeed Up, the Story of a Tuskegee Airman, a book that further details his life and experience as a Tuskegee Airman.