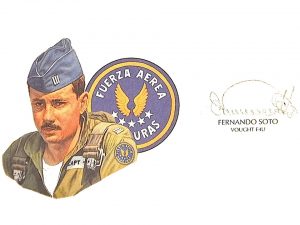 Honduran Air Force Captain Fernando Soto is credited with the only aerial victories ever recorded by a Central American air force. Soto was born in 1939 in Tegucigalpa, Honduras. He began his education at the Federico Froebel Elementary School and then went on to high school at the San Francisco Institute. After graduation in 1955, Soto went on an exchange program for a twelfth year of school at a high school in Los Angeles, California. In 1957, he became a flight cadet and went to the United States for basic training. He was a tall, thin youth and did not meet the basic weight requirements for pilot training.

After two months trying to gain weight, he returned home and began flying training in Honduras. Soto made his first flight in a North American AT-6 Texan and then continued to fly it in primary and advanced training. In August 1958, he earned his wings and was commissioned a sub-teniente de aviacion. As a active pilot in the Fuerza Aerea Honduras, he held many additional duties. In 1960, Soto became Chief of Academics and a flight instructor and ultimately became Chief of Training for the Air Force. He was an active operational pilot and flew patrols over the north coast of Honduras and participated in many exercises, including Operacion Patuca and Operacion Yunque Martillo.

During Operacion Centro America, he flew with pilots from other Central American air forces and the United States Air Force. In the summer of 1965, he flew troop transports in support of the Inter-American Peace Force operations in the Dominican Republic. Soto was decorated by the President of Nicaragua for locating and later rescuing two Nicaraguan pilots who had ditched in the Gulf of Fonseca on the Pacific Coast. In the late sixties, he was seconded to a Honduran airline and began a second career in commercial aviation. He remained in the air force reserves.

In 1969, during a short conflict called the ” Soccer War” with neighboring El Salvador, he became a national hero when he downed three opposing fighters. He was offered a medal or a promotion-he chose promotion to major. He joined Servicio Aereo Honduras S.A. (SAHSA) in 1960 and flew many propeller-driven aircraft such as the Curtiss C-46, Convair CV-340, CV-440, and CV-580. After flying the turboprop Lockheed Electra, he transitioned to jets and flew Boeing 727s and 737s. By the time he retired from SAHSA in 1994, he had served as an instructor pilot, and Chief of Pilots.

While strafing ground targets on 17 July 1969, Soto got a call that one of his mates, who, with his guns jammed, had two Salvadoran North American P-51 Mustangs on his tail. Soto entered the fray quickly and let loose a burst of 20-mm gunfire. The Mustangs broke.one left and ond one right. He turned starboard inside one Mustang, fired three bursts, and knocked off its left wing. Later, on his fourth mission of the day, Soto downed two Goodyear FG-1 Corsairs in a hard fought, turning and diving dogfight, from 13,000 feet to the deck.