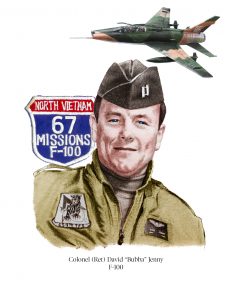 Col “Bubba” Jenny entered the Air Force in 1964. During his 28-year career as a fighter pilot, Bubba flew over 5,000 hours in 10 different aircraft including the F-100, A-7, A-10, F-16, and F-117. Bubba was one of the few Misty pilots of Vietnam and, like many of his squadron mates, was shot down in July 1968. From his time flying in combat, Bubba went on to be one of the first pilots in many of the Air Force’s newest aircraft. This culminated with his selection to the highly classified F-117 program. From over 300 combat missions to piloting the world’s first stealth aircraft, Col Jenny is a living testament to the history of airpower and the technological advancements that keep it relevant.