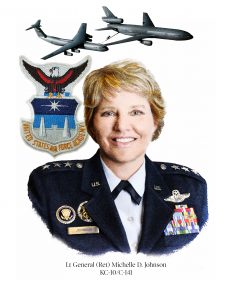 Lieutenant General Michelle D. Johnson achieved many historical firsts such as being the United States Air Force Academy’s first female cadet wing commander; the Academy’s first female Rhodes Scholar; the Academy’s first and only female inductee into the National Collegiate Athletic Association’s Academic All-America Hall of Fame; the first female Department of Defense (DOD) military aide to the President of the United States; and first female to lead a DOD service Academy. General Johnson was born and raised in Iowa. In 1977, then Cadet Johnson became a member of the second class of women admitted to the Air Force Academy after President Gerald Ford eliminated gender discrimination at the nation’s military schools. She graduated from the Academy in 1981 and was commissioned as a distinguished graduate. In 1983, following her time as a Rhodes Scholar at Oxford University, then Second Lieutenant Johnson began undergraduate pilot training at Williams Air Force Base (AFB), Arizona. Before 1993, women were not permitted to fly combat aircraft, so she chose to earn her initial qualification in the C-141. Captain Johnson returned to the Academy in 1989 as an Assistant Professor and in 1992 she was selected to be the Air Force aide to President George H.W. Bush. She stayed on in that role for President Bill Clinton until 1994. Following her White House tour, she transitioned from transport to air refueling operations at Travis AFB, California, where she became a K -10 instructor pilot and finished her tour as the 9th Air Refueling Squadron Commander. From there, she attended the National War College, and post-graduation, she assumed group command of the 97th Operations Group at Altus AFB, Oklahoma, and then wing command of the 22nd Air Refueling Wing at McConnell AFB, Kansas. Over the next seven years, General Johnson held various staff director positions at Air Mobility Command, Headquarters Air Force, Transportation Command, and NATO Headquarters. While assigned to NATO, General Mark Welsh, the Chief of Staff of the Air Force, selected General Johnson to become the 19th Superintendent of the United States Air Force Academy. As superintendent, she navigated the Academy through sequestration, the repeal of the “Don’t Ask, Don’t Tell” policy, and addressed high-profile cadet misconduct allegations. She transformed the commissioning experience into a culture of commitment, making it relevant for the modern generation of the Air Force’s future leaders. Following retirement in 2017, the National Basketball Association hired her to become their Senior Vice President and Head of Referee Operations. She held this position for two years until stepping down in 2019 to spend more time with her family.