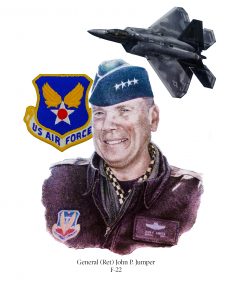 General (ret) John P. Jumper was born on February 4, 1945, in Paris, Texas. As the son of an Air Force fighter pilot, he moved around constantly before completing his senior year of high school at Hampton, Virginia. Jumper earned his commission as a distinguished graduate of Virginia Military Institute’s Air Force Reserve Officer Training Corps (ROTC) program in 1966. Jumper earned his pilot wings at Moody Air Force Base (AFB), Georgia in July of 1967. After pilot training, Jumper completed his first tour in Vietnam as a C-7 Caribou transport pilot in the 459th Tactical Airlift Squadron, Phu Cat Air Base (AB), South Vietnam, from October 1967 to October 1968. Upon returning from this tour, Jumper became qualified in the F-4 Phantom and returned for his second Vietnam tour as an instructor pilot, weapons officer, and a fast forward air controller in the 555th Tactical Fighter Squadron, Udon Royal Thai AB, Thailand from July 1969 to May 1970. Jumper’s next assignment would take him to the 81st Tactical Fighter Wing, Royal Air Force Bentwaters, England, where his primary mission was to sit on nuclear alert. Jumper then went to weapons school at Nellis AFB, Nevada in 1974. He stayed there to be a weapons school instructor until attending Air Command and Staff College in 1977. Jumper’s follow-on assignment was as a staff officer at Headquarters Air Force (HAF), before attending the National War College in 1981. Jumper returned to Nellis AFB as the chief of safety and a short stint as squadron commander before getting pulled to be the executive officer to the commander of Tactical Air Command (TAC) at Langley AFB, Virginia. Jumper was the wing commander for the 33rd Tactical Fighter Wing at Eglin AFB, Florida and the 57th Fighter Weapons Wing at Nellis AFB. From 1990 to 1994 Jumper spent his time in Washington D.C. performing various staff officer functions, including being the Senior Military Assistant to the Secretary of Defense and the Special Assistant to the Air Force Chief of Staff for Roles and Missions. Jumper was the 9th Air Force and US Central Command Commander from August 1994 to June 1996 where he oversaw operations Northern Watch and Southern Watch. From June 1996 to November 1997, Jumper was the Deputy Chief of Staff for Air and Space Operations at HAF. Jumper went on to be the US Air Forces in Europe and Allied Air Forces Central Europe Commander during Operation Allied Force. In 2000, Jumper returned to Langley AFB as the Commander of Air Combat Command (ACC). Finally, General Jumper’s 39-year career culminated in his serving as the 17th Chief of Staff of the US Air Force (CSAF) from September 2001 to September 2005.