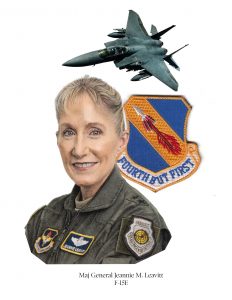 History celebrates firsts, and Major General Jeannie M. Leavitt has achieved many historical firsts as the United States Air Force’s (USAF) first female fighter pilot, first female fighter aircraft weapons officer, first female fighter wing commander, and the first female commander of the 57th Wing at Nellis Air Force Base (AFB), Nevada. General Leavitt was born in St. Louis, Missouri and graduated from Bishop DuBourg High School in 1985. In 1992, she received a Bachelor of Science degree in Aerospace Engineering from the University of Texas at Austin, where she also earned her commission as a Distinguished Graduate of the USAF Reserve Officer Training Corps (ROTC) program. While awaiting Undergraduate Pilot Training (UPT), she completed a Master of Science degree in Aeronautics and Astronautics from Stanford University, California. General Leavitt began UPT at Laughlin AFB, Texas, graduating first in her class in 1993. Before 1993, it was against the law for women to fly combat aircraft. When General Leavitt completed pilot training, the law had changed, but the Department of Defense (DOD) policy still contained the prohibition. Optimistic that the DOD policy would be modified to reflect the new law, General Leavitt requested to be assigned to the F-15E Strike Eagle. Her request was initially denied, and she was assigned to the KC-10. After transitioning to March AFB, California, but before her training began in the KC-10, General Leavitt accepted an opportunity to be a T-38 Instructor Pilot (IP) at Vance AFB, Oklahoma. During this time, the DOD rescinded its policy against women flying a combat aircraft, and General Leavitt was assigned to the F-15E, making her the first female fighter pilot. General Leavitt’s first assignment in the F-15E was at Seymour-Johnson AFB, North Carolina, where she deployed in support of Operations NORTHERN and SOUTHERN WATCH. In 1998, she graduated from the USAF Weapons School as the first female fighter aircraft weapons officer. After Weapons School, she was stationed at Mountain Home AFB, Idaho, where she met her husband, Colonel (retired) Craig Leavitt, a F-16 pilot and weapons officer. Following this assignment, she was stationed at Nellis AFB as a F-15E IP at the USAF Weapons School. She then served on staff at United States Forces Korea in South Korea, and at 9th Air Force and U.S. Air Forces Central Command at Shaw AFB, South Carolina. Her two children, Shannon and Michael, were born during this time. In 2007, General Leavitt became the Commander of the 333d Fighter Squadron at Seymour-Johnson AFB, North Carolina. After squadron command, she was a Chief of Staff of the Air Force Fellow at the Central Intelligence Agency in Washington, District of Columbia. She also deployed as a Deputy Operations Group Commander to Bagram Air Base, Afghanistan, in support of Operation ENDURING FREEDOM. In 2012, General Leavitt became the USAF’s first female fighter wing commander, assuming command of the 4th Fighter Wing at Seymour-Johnson AFB. Upon completion of her first wing command, she was named the Principal Military Assistant to the Secretary of Defense until 2016, when she again assumed wing-level command as the first female wing commander of the most diverse flying wing in the Air Force, the 57th Wing at Nellis AFB. Currently, General Leavitt is the Commander, Air Force Recruiting Service, at Joint Base San Antonio-Randolph, Texas. Throughout her career, she has accumulated 3,000 flying hours, including over 300 hours of combat flight time. She has successfully led thousands of Airmen and is now responsible for recruiting and training thousands of future Airmen. Additionally, General Leavitt was a principal advisor and the motivation behind the Walt Disney Company’s Captain Marvel film.