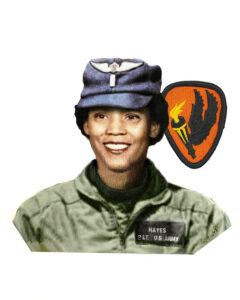 Lt Col (Ret) Marcella “Marcy” Ng is the nation’s first African American female military pilot and 55th woman to become a pilot in the United States Armed Forces. She was born 24 July 1956 in Mexico, Missouri and graduated from Hickman High School in 1974. Ng earned her commission as a Distinguished Military Graduate from the University of Wisconsin’s Army Reserve Officer Training Corps (ROTC) program in 1978. She earned her wings at Fort Rucker, Alabama in 1979 and initially flew the TH-55 and later qualified in UH-1 “Huey” helicopters. Following graduation from flight school, Ng attended the Army’s Aviation Maintenance Officer Course where she became Test Pilot Officer certified. Her first assignment was from 1980 to 1983 at the 394th Transportation Battalion at Stuttgart, Germany where she broke the glass ceiling as the unit’s first female and African American aviator. There, Ng also served in the Headquarters and Headquarters Company as Executive Officer, Dining Facility Officer, Ground Maintenance Officer, and the Battalion’s Adjutant. From 1983 to 1984, she attended the Transportation Officer’s Advanced Course at Fort Eustis, Virginia, in preparation for company command. Ng’s next assignment was to Fort Hood, Texas, from 1984 to 1987 where she served in the Training and Doctrine Command’s Combined Arms Test Activity as a Test Officer and later Company Commander. From 1987 to 1989, Ng was stationed at the 25th Transportation Center in Seoul, Korea where she was the Chief of Movement Region 1. Later that year in 1989, Ng was assigned to the 7th Infantry Division (Light) in Fort Ord, California, where she was the Division Support Command Movement Control Officer, Brigade Logistics, and Division Transportation Officer. During this tour, she supported Operations JUST CAUSE, DESERT SHEILD, DESERT STORM, and the Los Angeles riots. After her time in California, Ng attended the Army Command and General Staff College at Fort Leavenworth, Kansas. Upon graduation in 1994, she changed station to Fort Eustis, Virginia, for a second time, where she filled many positions as Chief of the Automation Logistics, Research and Development Division, 24th Transportation Battalion Executive Officer, and 7th Transportation Group Operations Officer. At the end of 1996, she returned to Korea, but this time she was assigned in Taegu and served as the Chief of the Maintenance Division at 19th Theater Army Area Command. Ng’s final change of station brought her back to Fort Hood, Texas in 1997 where she was the Commander of the 49th Transportation Battalion (Movement Control) and Inspector General at 13th Corps Support Command. Lt Col Ng retired from the United States Army on 30 September 2000 at Fort Hood. Today, she and her husband are successful entrepreneurs, as owners and operators of Mililani Woods, LLC, a wedding and special events venue located in Nolanville, Texas.