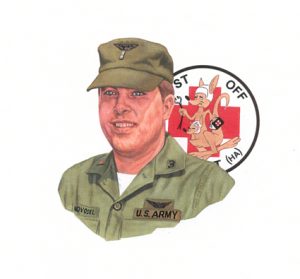 Mike Novosel, Jr. is the only pilot to fly in the same helicopter unit with his father in combat! Born in 1949 at Eglin AFB, Florida, Novosel grew up around pilots and aircraft. As a teenager, he took every opportunity to be down on the flight line. In 1968, at the peak of the war in Southeast Asia, he graduated from high school in North Carolina and, at 19, enlisted in the Army. After basic training, he reported to Fort Wolters, Texas, for flight school and trained in the same flight in which his father had served as a contract instructor earlier.

Novosel graduated, received appointment to warrant officer one, and earned his wings on 15 December 1969. It was exactly 27 years after his father had earned his wings! He volunteered for duty in Vietnam and, when he arrived, requested assignment to the 82nd Medical Detachment. With his father’s approval, he joined the unit. His father gave him a “dollar ride,” an auto-rotation check, an “in-country” flight evaluation, and then cleared Novosel, Jr. to fly the Bell UH-1 “Huey.” The two Novosels suspended a normal father-son relationship for the next few months, but, when Novosel, Sr. completed his tour, his son flew him to the departure processing base. In July 1970, Novosel, Jr. became an aircraft commander and inherited his father’s call sign, “Dustoff 88. ”

In a year tour, he flew 1,736 missions, earned 37 air medals, and rescued more than 2,500 allied airmen, sailors, and soldiers. He returned to the States as a chief warrant officer (CWO-2), married, and was assigned to Fort Bragg, North Carolina. After serving at Pusan, Korea, he flew the “Huey” and the Bell OH-58 Kiowa with the 3rd Armored Cavalry Regiment at Fort Bliss, Texas. Posted to Fort Rucker, Alabama, Novosel earned an associate degree in Aviation Safety and then went to the 377th Medical Detachment at Camp Walker, Korea. In 1981, he returned to Fort Rucker as a flight instructor and earned a degree in Professional Aeronautics from Embry Riddle Aeronautical University.

Next, he was Aviation Safety Officer for 2nd Infantry Division in Korea and then became a classroom teacher and instructor pilot back at Fort Rucker. After assignment to the 12th Aviation Brigade in Germany, Novosel’s final duty was Installation Safety Officer at Fort Bragg; he retired as a CWO-4 in 1991 with over 5,500 flying hours. In a varied second career, he has flown spotting missions for fishing fleets in the south Pacific, crop dusted, and hauled timber. Since 1991, Novosel has flown support for offshore oil exploration and drilling operations in the Gulf of Mexico. With almost 11,000 hours, he pilots the Bell 407, a state-of-the-art machine, for Air Logistics. He now divides his time between the oil platforms and his home and wife, Margaret, in Florida.

Mike Novosel, Jr. was supporting troops of the Republic of Vietnam (ARVN) in a sweep southeast of Binh Thuy. In the afternoon, his father had just picked up a wounded soldier, when he heard that his son's aircraft was going down. He rushed to the scene and picked up the crew. Six days later, Novosel, Sr. was supporting an ARVN force when his helicopter's tail rotor was torn off in a freak accident and went down in a rice paddy. By chance, his son was nearby and came to his rescue. It was the father's turn to buy drinks that night for his rescuers!