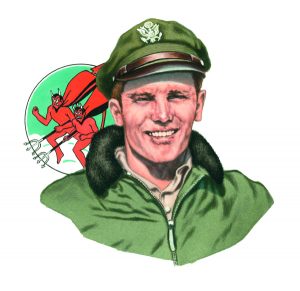 The “Old Man” of MiG Killers over North Vietnam, Brigadier General Robin Olds is one of history’s most colorful aces. Born in Honolulu, Hawaii, in 1922, he is the son of Army Air Force Major General Robert Olds, a World War I combat pilot and aide to the legendary air power pioneer, Brigadier General Billy Mitchell.

Olds won an appointment to the United States Military Academy at West Point and as a cadet, he completed primary flight training in Tulsa, Oklahoma. A born competitor, he was captain and starting tackle for the Academy’s football squad and was named to the 1942 All-America team. After basic and advanced flight training, Olds received his wings and graduated two days later at the end of his third year at West Point. He went to fighter tactics school and trained in the Lockheed P-38 Lightning, and then, in the spring of 1944 was sent to England. Olds became an ace in August, downing five enemy fighters on two missions. He soon checked out in the North American P-51 Mustang, and in February 1945, took command of his unit, the 434th Fighter Squadron.

At wars end, he had flown 107 combat missions and was officially credited with 14 aerial victories. Upon returning home from the war, Olds helped create the first U.S. jet aerobatics team, flying the Lockheed P-80 Shooting Star. In 1946, he flew in the National Air Races, placed second in the Thompson Trophy Race, and took part in the first round-trip transcontinental flight completed in one day. Olds returned to England in 1948 and became the first American to lead a Royal Air Force (RAF) squadron as Officer Commanding, 1 Squadron at RAF Tangmere, where he also flew the Gloster Meteor.

During the 1950s, Olds commanded fighter squadrons in the United States, Germany, and Libya as well as serving in staff jobs in Washington, D.C. After graduating from the National War College in 1963, he returned to the air over England as the 81st Tactical Fighter Wing (TFW) Commander. In 1966, he led combat missions once again during the Vietnam War, flying the McDonnell F-4 Phantom II from Ubon AB, Thailand. While commanding the 8th TFW “Wolfpack”, Olds flew 152 missions and added 4 victories. He next served as Commandant of Cadets at the United States Air Force Academy, and then became Air Force Director of Aerospace Safety before retiring in 1973. Among his many decorations are the Air Force Cross and the Silver Star with three oak leaf clusters.  He is the only person ever enshrined in both the National Aviation Hall of Fame (class of 2001) and the College Football Hall of Fame (class of 1985). Gen Olds was selected as an inaugural Eagle of the Air Command and Staff College’s Gathering of Eagles in 1982 and subsequently honored in 1994, 1997, and 2005, respectively.

The painting shows General Olds in his F-4C Phantom, "SCAT XXVII," getting the first of his four kills in the Vietnam conflict. The MiG-21 was downed on 2 January 1967 when General Olds, leading the most famous fighter sweep of the war (Operating Bolo), shot down one of seven MiG-21s claimed that day against no American losses. As a wing commander in Southeast Asia, General Olds flew 152 missions of which 117 were over North Vietnam.

On 7 April 1945, Major Robin Olds was leading the 479th Fighter Group on a mission over Germany in his North American P-51 Mustang "Scat VI." Escorting a formation of bombers, Olds noticed contrails popping up over clouds at his nine o'clock position. Turning toward the contrails, he got "Tally-ho" on a group of 12 Messerschmitt Me 262 jets diving in on the bombers. After an engagement with one of the jets, Olds looked back at the bombers and saw an Me 109 attacking the formation. He followed the enemy through the middle of the bombers, opened fire and scored direct hits. The pilot bailed out and his airplane went straight in!

Thai Nguyen steel mill was the most heavily defended target in the most heavily defended complex on earth. The clouds were dark and laden with rain as a three-ship of McDonnell Phantom IIs neared their objective, just a few feet above the rice paddies. Colonel Robin Olds flight was nearly surrounded by a wall of orange fire and flak, but they pressed their attack to success and then flew their battle-scarred fighters back to base. This mission highlighted his leadership from the cockpit approach to command of the 8th Tactical Fighter Wing!

Flying a P-38J on a low-level mission over Montmirail, Olds spotted two bogeys. He pulled behind them and identified them as FW-190s. At 400 yards behind the trailing plane, he fired a six-second burst, hitting the left wing and then pulling his gunfire onto the fuselage. Flame and smoke poured out as the airplane rolled to the right and hit the ground. As the second plane pulled a full 360-degree turn, Olds stayed with him and from dead astern, fired a five-second burst. He observed the Focke-Wulf zoom up and the pilot bail out.