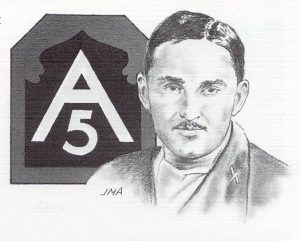 In November 1942, Captain John Oswalt became one of the first ten US Army “L” (liaison) pilots sent into combat. Flying in North Africa, he and his fellow pilots proved that organic Army aircraft could be successfully used for artillery spotting. Oswalt and his L-5 aircraft next participated in the Anzio invasion and, during operations over the Anzio beachhead, a German antiaircraft shell hit Oswalt’s L-5 and broke both wing spars. Although his aircraft was severely crippled, he managed to remain over the beach for another 90 minutes until he had helped eliminate the German batteries. His accomplishment during this day earned him the Silver Star; present at the award ceremony were King George VI, General Mark Clark, and Field Marshal Alexander.

After the Anzio breakout and during the Allied drive north to Rome, John Oswalt became America’s first forward air controller. At the time, the Germans were retreating quickly before rapidly advancing US armored columns. The battle was moving so fast that American armor had taken the positions held by German columns before US fighters could arrive. The result was that many American units were in danger of attack by their own aircraft. To direct air strikes to the proper targets, Captain Oswalt installed UHF radios in two L-5s and used the call signs Horsefly Red and Horsefly Yellow so that he could communicate with the American fighters.

To ensure recognition of the small L-5s, he painted the top of the wings of one plane red and the top of the other yellow. This operation marked the first use of light Army aircraft to direct fighter strikes. Later in the Italian Campaign, he became General Mark Clark’s personal pilot. After World War II, Colonel Oswalt became involved in aviation research for the Army and was instrumental in developing and testing the first armed helicopter unit in the US Army. This concept ultimately evolved to the creation of air-mobile divisions currently used. For his many achievements, he was inducted into the Army Aviation Hall of Fame in 1976. Now retired, Colonel Oswalt ‘s achievements as a flyer continue. In August 1981, he managed the first US helicopter team to win the world helicopter competition.

Colonel John Oswalt's L-5 Sentinel, the "Lady Luck," is shown as it appeared in its first improvised FAC missions in Italy. Called the "Maylag Messerschmitt" by its pilots, it became the first American forward air control aircraft.