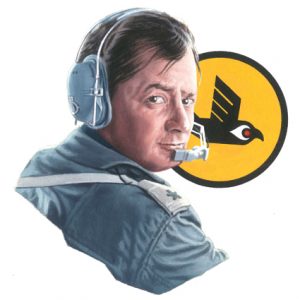 Few boys grow up believing that one day their actions will save the lives of thousands. At age 10, Arieh Oz was certainly no exception. He was just grateful to be alive. Yet his story is a lifelong testimony of courage, honor, strength, and a desire to help those in need. Born Harry Klausner in 1936 Nazi Germany (his name was later Hebracized by Ben-Gurion, the first Prime Minister of Israel), Arieh Oz learned of war at an early age. Fleeing Nazi persecution, his family spent most of World War II in hiding with Christian Dutch farmers. They immigrated to Israel in 1946, where Oz finished school and was later accepted into the highly selective Israeli Air Force (IAF) Flying School. Graduating with the 19th class, he earned his pilot wings in 1956. In 1960, Oz was assigned to the Imperial Ethiopian Air Force where he gained African flying experience that would later make him invaluable in the Entebbe Raid. His active duty IAF service culminated in 1963 with his command of the newly formed “International” Squadron. Comprised of Boeing C-97 Stratocruisers and Douglas C-47 Dakotas, their missions focused on transport, airlift, patrols, and special missions abroad, particularly to Africa. Oz entered civilian life in 1967 joining Israel’s EL AL Airlines, where he rapidly qualified as an airline captain and later rose to hold such positions as flight instructor for the airline’s entire fleet, fleet manager for the Boeing 737 and 747-200, and director of flight operations. In 1976, he was recalled to duty for Operation Thunderbolt, a highly secretive mission to rescue the hijacked passengers of Air France Flight 139. Terrorists had diverted the plane to Entebbe, Uganda and as an expert in African missions, Oz was one of four C-130 pilots called upon for the dangerous mission. Loaded far above legal performance weight with commandos and equipment, they flew in tight formation for 7 ½ hours under radio silence and without GPS. By the time Oz approached Entebbe, Ugandan soldiers had darkened the runway, forcing him to bravely risk landing his aircraft with only his co-pilot’s visual cues to guide him. His fearless expertise contributed to the rescue of over 100 hostages. In the late 1970s, Oz also served as president of Israel’s Pilot Association, a member of their UN delegation, and advisor to Israel’s ambassador on aviation terror. Some years later, Oz was again called upon to serve his country as the lead pilot in Operation Solomon. He aided EL AL in planning the operation using their Boeing 747s for a massive humanitarian mission rescuing persecuted Ethiopian Jews. On 24 May 1991, Oz flew the first Boeing 747 ever to land in Addis Ababa, and airlifted 1,087 passengers to Israel, a feat noted in the Guinness Book of Records. Overall, Operation Solomon evacuated 14, 324 Ethiopian Jews in just 36 hours. Operations Thunderbolt and Solomon were missions with both overwhelming obstacles and the most important objective–saving lives. Who would dare to risk such devastating odds? Only a man like Lt Col Arieh Oz, who had learned the value of courage early in life, could meet such challenges. Even after retiring from EL AL in 2001 with an impressive 28,000 flight hours, Oz remains active in aviation. He has served as aviation consultant to EL AL and Israel’s Airport Authority, chief of operations for the Ministry of Transport, and most recently, aviation accident investigator for the Ministry of Transport and an independent aviation consultant. Oz is enjoying the third phase of his aviation career with his beautiful wife of over 50 years, Bat-Sheva. They live in Ramat Hasharon, Israel, and together have had the joy of three children and seven grandchildren.

On 4 July 1976, Major Arieh Oz flew third position in a 4,800-mile airborne commando raid to rescue Israeli hostages from terrorists in Entebbe, Uganda. Four C-130s flew in tight formation for 7 ½ hours under radio silence at extreme low level. Oz arrived to a darkened, hostile runway, forcing a dangerous landing guided only by his co-pilot's visual cues. In less than one hour, the commandos secured the airport, sabotaged MiGs, acquired fuel and rescued over 100 hostages, making the Entebbe Raid one of the most successful triumphs over terrorism in history!