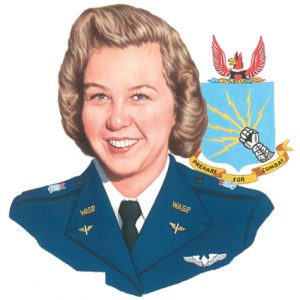 Deanie Bishop Parrish, like so many of the Greatest Generation, doesn’t consider herself a hero. She regards her service as one of the elite Women Airforce Service Pilots (WASP) as an honor and a privilege. Born in DeFuniak Springs, Florida, in 1922, Deanie grew up in Avon Park. Encouraged by her mother that she could be anything she wanted to be if she studied hard and put her mind to it, she never missed a day of school, graduating as valedictorian in 1939. In 1940, a primary flying school for Army Air Corps cadets moved into her hometown. There were no female pilots in Avon Park, but Deanie believed if boys could learn to fly, so could she. She convinced one of the flight instructors to teach her. On her first solo, flying from the rear seat of the instructor’s J3 Piper Cub, she reached altitude and started to level off when the control-stick suddenly came off in her hand. She quickly tore off her seat belt, hung over the front seat, pushed on the front joystick, and held it there until the plane was no longer in danger of stalling and crashing. She then climbed over and into the front seat to fly the aircraft. When she landed, her stunned instructor assured her, “Now you know. You have the ‘right stuff’ to be a pilot!” During the early months of WWII, huge losses of American combat pilots created a desperate need for more pilots. Deanie learned of a new experimental AAF flight-training program, comparable to the one the AAF cadets were taking, to teach women pilots to fly military aircraft. She took the military oath of office on 1 Nov 1943, and seven months later graduated and received her silver WASP wings. Her first AAF orders were to Greenville AFB, Mississippi, as an engineering test pilot in BT-13s and UC-78s. She was soon transferred to Tyndall AFB, Florida, completed B-26 training, and was retained as an air-to-air tow target pilot to train gunners for combat. It was there she met her future husband, a B-24 former combat pilot who evaded capture after being shot down over Yugoslavia. On 20 December 1944, the WASP were disbanded. Deanie then became the chief aircraft dispatcher at Langley Field, Virginia, as the first and only civilian in base operations. She married in June 1946 and became a proud Air Force wife and mother of two daughters. After her husband retired, she spent over 5,000 hours as a hospital volunteer. When her youngest daughter graduated from Baylor University, Deanie enrolled in the University of Houston, graduating Summa Cum Laude/Phi Kappa Phi. In 1998, five years after losing her husband, Deanie became the associate director of Wings Across America, founded by her daughter, Nancy. For the last 15 years she has traveled to 19 states and interviewed more than 100 WASP, co-founded the National WASP WWII Museum at Avenger Field, Texas and the WASP “Fly Girls” traveling exhibit, composed a WASP rap song, The Right Stuff, and represented the WASP through speeches and writings. Deanie always believed that “With God’s help, nothing is impossible,” so she took on and won her biggest challenge: to activate her plan to convince Congress to award the WASP the Congressional Gold Medal so generations to come would be educated and inspired by their history. In 2010, Congress invited her to accept that prestigious medal on behalf of all WASP. In her acceptance speech, she expressed her belief that the service of every WASP was invaluable to America’s victory in WWII. As a feminine voice of the Greatest Generation, Deanie Parrish remains a proud member of the WASP, who forever changed the role of women in aviation. .

During WWII, when the Army Air Forces were desperate for pilots due to major combat losses, Deanie Parrish bravely answered the call. Already a trained pilot, Deanie was accepted into an experimental AAF program to teach females to fly military aircraft. She graduated as a Women Airforce Service Pilot and flew the B-26 as an air-to-air tow target pilot training gunners for combat.