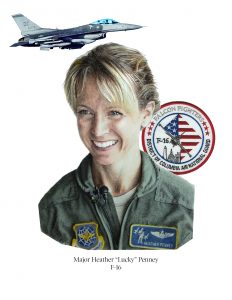 Major Heather “Lucky” Penney was one of the first female pilots to go directly into fighters from pilot training and was the first female fighter pilot in the District of Columbia Air National Guard. Heather Penney was born into aviation. Her father was an A-7 pilot during Vietnam and later flew the RF-4 Phantom, but her passion for flying flourished while shadowing her father during the Reno Air Races.  Ever since she fell in love with the F-4, she knew she wanted to be a fighter pilot. She grew up in Reno, Nevada, and Evergreen, Colorado, and participated in marching band and drum corps, where she learned about discipline and hard work. She attended Purdue University and earned a Bachelor’s and Master’s degree in English and American Studies. While in graduate school, she learned that the Air Force would soon allow female pilots to train directly into fighter aircraft. She was selected by the DC Air National Guard to fly F-16s and started pilot training in 1998. Upon completion of Euro-NATO Joint Jet Pilot Training, she started flying at the 121st Fighter Squadron in January 2001. On September 11, 2001, she scrambled an unarmed jet from Andrews Air Force Base, Maryland to defend the capital from additional attacks. She was prepared and authorized to ram her jet into any threats. She deployed in support of Operation Iraqi Freedom in 2003 and 2006. After flying the F-16 for 10 years, she flew VIP Special Airlift Missions and later worked in the National Military Command Center. In a civilian capacity, Penney worked for Lockheed Martin on the F-22, F-35, and T-50A programs in Washington D.C. She continues to advocate for airpower as a Senior Resident Fellow at the Air Force Association Mitchell Institute for Aerospace Studies.