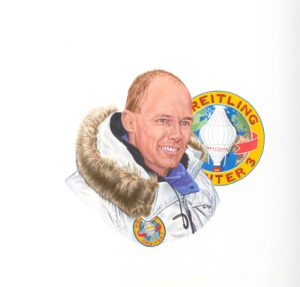 Dr. Bertrand Piccard was the captain of the first hot-air balloon team to circumnavigate the globe. Born in Lausanne, Switzerland, in 1958 into a family of explorers and scientists, Piccard was enamored with adventure at an early age and inspired by his grandfather, August Piccard, who pioneered high altitude balloon flight, invented the Bathyscaphe deep-diving submarine, and created the concept of the pressurized cockpit. His father, Jacques Piccard, is also an explorer and holds the record for the deepest dive-seven miles. His father also helped Piccard meet his childhood heroes-Herman Geiger, Jacques Mayol, Wernher von Braun, and Charles Lindbergh-and begin his march towards aviation history.

In 1974, he discovered hang-gliding and set several records for altitude, distance, and aerobatics. He then founded Piccard Aviation and participated in the development of a microlight prototype. A renowned scientist and psychiatrist, Piccard has published numerous insightful works on human behavior in extreme situations. His pioneering efforts in the field of hypnosis and stress management assisted him in studying and dealing with the effects of the long-term tensions involved in intercontinental balloon flight. His culminating and celebrated achievement was the first round-the-world hot-air balloon flight. His first attempt in the Breitling Orbiter in 1997 ended after only six hours due to a kerosene leak. His second attempt in Orbiter II in 1998 ended after nine days due to China’s refusal to allow overflight.

The third attempt achieved one of the last remaining aviation milestones. On 1 March 1999, the Orbiter III lifted off from Chateau d’Oex in Switzerland and landed in Egypt 19 days later after a 45,633 km flight. Piccard was subsequently awarded the Légion d’Honneur, the Olympic Order, the Gold Medal of the French Ministry of Youth and Sport, and was recognized with distinction by the Federation Aeronautique Internationale, the National Geographic Society, and the American Academy of Achievement. Piccard has also been named the Goodwill Ambassador for the United Nations Population Fund.

Piccard and his co-pilot on the historic flight, Great Britain’s Brian Jones, later founded with Breitling the Winds of Hope Foundation to inform the media of intolerable situations and to appeal for financial assistance for humanitarian projects. As a result of his exploits, Piccard is now often referred to as “Le Savanturier” (from the French words “savant” meaning scientist and “aventurier” meaning adventurer)-someone who is endeavoring to combine the scientific background inherited from his family with his desire to explore the great adventure of human life. Piccard currently resides in Lausanne.

Between 1998 and 1999, there were seven failed attempts to circumnavigate the world in a balloon. However, on 21 March 1999, Bertrand Piccard and Brian Jones accomplished this feat just two weeks after another balloon was forced to ditch in the Pacific after smashing the endurance world record. Piccard's third attempt proved to be historic. The 19-day, 21-hour and 47-minute flight completed the first non-stop round the world balloon voyage and set seven world records including the record for the longest flight in duration and distance.