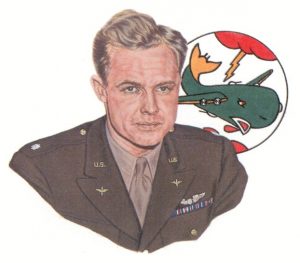 Ramsay Potts, at age 26, led a bomber force during one of World War II’s most historic missions! Originally from Memphis, Tennessee, Potts attended the University of North Carolina, and in 1941 graduated Phi Beta Kappa. In May, he enlisted as an aviation cadet and went through flight training at Randolph and Brooks Fields, Texas. Potts earned his pilot wings and commission just days after the Japanese attacked Hawaii. Assigned to the 330th Bomb Squadron in the 93rd Bomb Group (BG), he flew Consolidated B-24 Liberators and by August 1942 became squadron Operations Officer. The 93rd BG was known as the “Traveling Circus” because it was detached from Eighth Air Force three times.

In mid-1943, the Group moved to North Africa and on 1 August participated in the first, and most famous, raid on the refineries at Ploesti, Rumania, the major source of petroleum that fueled the Axis war machine. Potts, now a squadron commander, led Force B of the Liberators. When the lead plane of the raid turned at the wrong initial point, he tried to warn the mission commander, but to no avail. Potts’ force attacked the Astra Romana refinery as a target of opportunity. He received the Distinguished Service Cross, was promoted, and later became Group Operations Officer. In March 1944, Potts took command of the 453rd Bomb Group, with movie star Jimmy Stewart as his executive officer. Five months later, Potts assumed command of the 389th Bomb Group, and in November 1944 moved to the Eighth Air Force staff.

In January 1945, he became Director for Bomber Operations and when the Germans surrendered he became Executive Officer of the Military Analysis Division for the US Strategic Bombing Survey. He interrogated many of the former leaders of both Germany and Japan and wrote reports for presentation to U.S. political and military leaders. Leaving active duty as a colonel in February 1946, Potts returned to civilian life, but remained in the reserves. He served on the faculty of the Air War College and as Chairman, Secretary of the Air Force’s Air Reserve Policy Committee. He earned a law degree from Harvard in 1948 and later became a founding partner and managing director of a major law firm in Washington, D.C.

In addition to his law practice, he has written many articles for the Air Force Magazine and served as publisher of Air Power History. He served as Director, Emerson Electric CO., has been active on the boards of numerous public organizations in the fields of education, transportation, finance, and national security resources. He has also been Associate Counsel, Senate Armed Services Subcommittee. Retired from the Air Force Reserve as a major general, he enjoys tennis and divides his time between homes in Virginia and Florida.