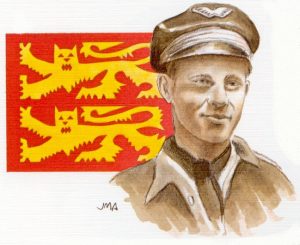 Captain Roland de la Poype was the second ranking ace and youngest squadron commander in the Normandie-Niemen Regiment, a group of French volunteer pilots who fought on the Russian Front during World War II. Having flown civilian aircraft prior to his entry into military aviation, he was attending a French Air Force fighter school in May 1940 when German General Guderian’s blitzkrieg attack on France forced him to flee to England via North Africa. He then joined the RAF, completed operational and fighter training, and was posted to No. 602 Squadron flying Spitfires. While with this unit, he flew more than 60 combat missions and achieved one aerial victory.

During this same time, the head of the Free French Air Force, General Valin, entered into negotiations with the government of Russia to send French pilots to the Eastern Front to assist the Russians in their campaign against the Germans. De la Poype was one of twelve volunteers to join the initial cadre, traveling to Russia through Iraq and Iran before arriving in November 1942 at Ivanovo, a town 200 miles east of Moscow. The two squadrons, initially called the Normandie Group, were given Russian-built Yak fighters and assigned to the 303rd Fighter Aviation Division of the 1st Air Army, commanded by Major General Zakharov.

Until the collapse of Germany in May 1945, the Normandie-Niemen Regiment fought in three campaigns, which included four major battles–Smolensk, Belo-Russia, Lithuania, and East Prussia. De la Poype achieved fifteen additional aerial victories during this time and was one of only four members of the regiment to be awarded the Hero of the Soviet Union medal. He also made the first successful one-wheel landing in a Yak, and so set the standard for that procedure. After the war, Roland de la Poype returned to France and was decorated with the French Croix de Liberation. He subsequently served as mayor of Champigné for 24 consecutive years.

The Normandie Group flew four different models of Russian-built Yak fighters during the war. It was during the second major campaign on the Russian Front (May-December 1944) that the unit became known as the Normandie-Niemen Regiment. The name change resulted from Stalin conferring a battle honor on the group for their role in the Russian victory at Alitous on the Niemen River in July 1944. During their nearly 3 years of existence, the regiment grew to four squadrons and achieved 273 aerial victories.