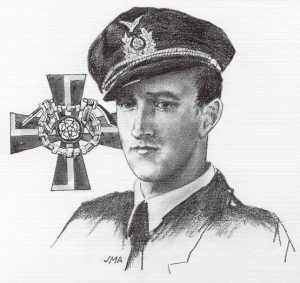 Risto Olli P. Puhakka, one of Finland’s leading aces during two wars against the Russians, joined other pilots from his small but gallant country in forging an unforgettable chapter in aviation history. In 1935, he was conscripted into the world’s second oldest air force, and, at the age of 19, was trained as a fighter pilot. He first saw combat in late 1939 when, following Finland’s rejection of Russian demands to turn over military bases and strategic territory, the Soviet Union invaded his comparatively small country. At the outset of the 16-week Winter War, he was in a squadron equipped with 36 Dutch-built Fokker D-XXIs; of approximately 115 serviceable aircraft in the Finnish Air Force, the Fokkers were the only planes considered to be “modern ” fighters.

He also flew combat in Italian Fiat G-50 and German ME-109G fighters when his country fought alongside Germany in the subsequent Continuation War against the Russians from June 1941 to September 1944. In both wars, Puhakka flew a total of 401 combat missions and achieved 42 confirmed aerial victories and more than 20 probables. He gained his status as Finland’s sixth ranking ace by downing 3 types of bombers and 11 types of Russian-piloted fighters, including YAK-9, Aircobra, and Hurricane aircraft. He gained over half of his victories while serving as flight commander in a ME-109 squadron; during the same period, this unit achieved greater than a 19:1 kill ratio. His numerous decorations include Finland’s supreme award for gallantry – the Mannerheim Cross. Following the war, he joined Finnair National Airlines and held positions as chief pilot and director of flight operations. Puhakka, who retired in 1971, lives with his family in Helsinki, Finland.

Although greatly outnumbered during the Winter War, the Finns quickly gained a reputation for their ingenuity and fierce fighting spirit. Flying Fokker D-XXI fighters marked with the light blue swastika national emblem as shown in the painting, Olli Puhakka joined other pilots in his squadron in destroying 120 Russian bombers while losing only 12 of their own planes. With his aircraft often equipped with skis and flown from snow-covered frozen lakes, he personally brought down one fighter and five Russian bombers in this brief war. After fighting for 16 weeks in the depths of the sub-Artic winter, Finland was forced in mid-March 1940 to accept the unfavorable conditions of an armistice that lasted until the start of the Continuation War.