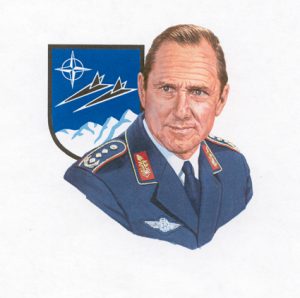 “The flyingest General in the German Air Force,” Günther Rall, entered the German Army in 1936 as an officer candidate in the infantry. However, the 20-year-old Rall decided aviation was his real interest and transferred to the Luftwaffe. After pilot training, he was assigned to Fighter Wing (JG) 52 in 1939. On 12 May 1940, during the blitzkrieg into France, he scored his first victory–a P-36 Mohawk. At 22 years old, he became Staffelkapitän (squadron commander) of 8./JG 52 and fought for 5 months during the Battle of Britain and then participated in the German advance into the Balkans and Greece.

As Operation Barbarosa , the advance into Russia, began, Rall’s squadron downed almost 50 Soviet bombers in a 5-day period. On 28 November 1941, with 36 victories to his credit, he was shot down near Rostov. His back was broken in three places and doctors said he would never fly again. Determined to return to combat, in August 1942, he rejoined his squadron on the Eastern Front and soon earned the Ritterkreuz (Knight’s Cross) for his 65th victory. By late October, he scored his 100th victory and added the Eichenlaub (Oak Leaves) to his Knight’s Cross. In April 1943, he took command of III Group of JG 52 and on 29 August 1943 recorded his 200th victory. In the next 3 months, he added another 50 enemy aircraft to his score and was awarded the Schwerten (Swords) to his Knight’s Cross.

Even though out of combat for 9 months, he was the second pilot to reach the 250 victory-mark. In March 1944, he was sent to the Western Front to command II/JG 11, but was soon wounded in a battle with P-47 Thunderbolts over Belgium and did not return to combat for 6 months. At war’s end, he commanded JG 300, flying the long-nosed Focke Wulf FW-190D.

In 1956, he joined his nation’s new air force as a lieutenant colonel and was sent to Arizona to train at Luke AFB. Later, Rall was responsible for procuring the F-104 Starfighter for the German Air Force. As Commander of the German Tactical Air Command, he oversaw the training of a new generation of skilled pilots. He became Commander of the German Air Force in 1970 and strengthened its role in the NATO Alliance. He retired in 1974 as a lieutenant general with almost 40 years of service to his country.

In total, Rall shot down at least 275 opponents and is the third highest-scoring ace in the history of aerial combat. Generalleutnant.(Lieutenant General) Rall was first selected as an Eagle by Air Command and Staff College’s Gathering of Eagles in 1983 and subsequently honored in 1989 and 2000.

In late 1958, the German Federal Republic selected the Lockheed F-104 Starfighter to be the primary fighter. The first Luftwaffe Starfighters were built in the United States, but, by September 1962, the aircraft was being built in seven countries including Germany. The Luftwaffe flew the Starfighter as a fighter-interceptor, fighter-bomber, and as a photographic reconnaissance aircraft. The F-104G had unmatched performance among fighters of the world and played an important role in the defense of free nations in Europe for many years.