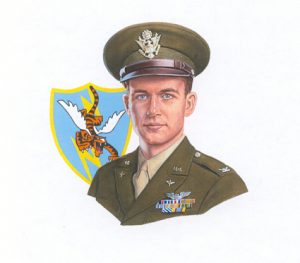 Ed Rector was just 10 years old when an older brother advised “get into aviation, that’s going to be the coming thing.” Growing up in Marshall, North Carolina, Rector, at age 12, gleaned knowledge from pulp aviation magazines such as Battle Aces . Later, while at Catawba College, he hitchhiked for a day and a half in February snow and slush to Langley Field, Virginia. There, he tested for pilot training and passed the exams, but the flight surgeon rejected Rector because he had a “cold! ” After college, he qualified for flight training in the Navy and soloed after 10 hours flying at NAS Anacostia, Washington, D.C. He went on to advanced training at NAS Pensacola, Florida, and earned his gold wings.

Rector joined the fleet aboard the carrier USS Ranger and flew the Vought SB2U Vindicator in Bombing Squadron Four. In 1941, he left the Navy to join a group of pilots and ground personnel who “volunteered” to defend the Burma Road, the only supply line open from the west to war-weary China. In the American Volunteer Group (AVG), Claire Chennault taught Rector and other pilots to effectively fly the Curtiss P-40 Tomahawk in a fight with more agile Japanese fighters. On 9 December 1941, with raiding Japanese bombers inbound, Rector ran to the flight line and found his P-40 undergoing maintenance. The crew chief quickly reassembled the plane and the young pilot took off to rejoin the other AVG fighters.

During the ensuing pursuit, he selected the last bomber of a perfect formation and shot it down. It was the first AVG aerial victory! When the “Flying Tigers” disbanded, Rector stayed on with the China Air Task Force and became a squadron commander. After a tour doing test work on the North American P-51 Mustang , he returned to China and ultimately commanded the 23rd Fighter Group. At the end of World War II, he remained as Director of Operations for the Military Assistance Advisory Group (MAAG) to the Chinese Air Force. Rector’s vast knowledge of China really paid off when he returned to the newly formed MAAG for the Nationalist air force on Taiwan. When he arrived, the free Chinese forces were destitute.

Two and a half years later, there were three fighter wings equipped with late model Republic P-47 Thunderbolts and a wing with P-51s. One wing soon re-equipped with the Republic F-84 Thunderjet. Rector helped the Nationalists to upgrade five airfields and establish a combat air command. He retired from the United States Air Force in 1962 as a colonel, and had a second career in the aviation industry as a consultant in India, North Africa, and Europe. The boy from the mountains of western North Carolina, who read pulp magazines, became an ace with over 10 aerial victories and helped aviation become “the thing.”

The China-Burma-India Theater was the first place that Axis forces fought an "American" unit during World War II. Rector, one of the original members of the American Volunteer Group, the "Flying Tigers," first gave the Japanese a bloody nose over Burma. Later, as a squadron commander, he fought in the struggle for control of the vast interior of China. In 1945, he commanded the 23rd Fighter Group, and his unit's Mustangs raided seaports from Hong Kong to Wenchang. In Rector's own words, the group gave the Japanese "Holy Hell."