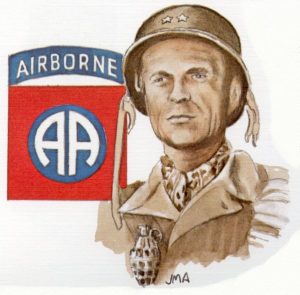 Designed in 1935 as the DC-3, over 10,000 C-47s were produced--more than any other military transport aircraft. Throughout WW II, the C-47 Dakota was the workhorse of airborne operations, providing airlift for paratroopers and serving as a glider tow. Flying in a C-47 from the 52nd Troop Carrier Wing, General Ridgway and his 82nd "All American" Airborne Division airdropped into Normandy as part of the largest airborne operation up to that time. The vast numbers of aircraft operating over Normandy was cause for the black and white "invasion stripes" to be painted on the aircraft prior to D-Day to clearly identify friendly aircraft to ground forces.