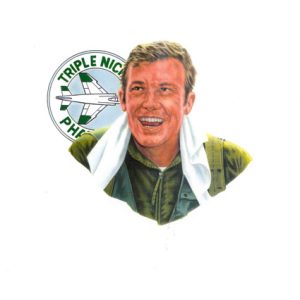 Brigadier General “Steve” Ritchie is the U.S. Air Force’s only pilot ace of the Vietnam War. Born in North Carolina in 1942, he graduated from the U.S. Air Force Academy in 1964. He then attended undergraduate pilot training in Texas where he finished first in his class. His first assignment was flying the Lockheed F-104 Starfighter , from which he transitioned to the McDonnell Douglas F-4 Phantom II . He served his first combat tour in 1968 at Da Nang Air Base, Vietnam, flying with the 366th Tactical Fighter Wing. During this assignment, he flew the first F-4 “Fast FAC” (Forward Air Controller) mission in Southeast Asia.

Following a tour as a Fighter Weapons School instructor, Ritchie volunteered for a second tour in Southeast Asia and, in 1972, was reassigned to the 555th “Triple Nickel” Tactical Fighter Squadron at Udorn AB, Thailand. As the Wing Weapons Officer of the 432d Tactical Fighter Reconnaissance Wing, he was instrumental in developing the wing’s aerial employment tactics during Operation Linebacker. On 10 May 1972, Ritchie was flying with his weapon system officer, Captain Chuck DeBellevue, when they destroyed their first MiG-21 with a radar-guided Sparrow missile. Following another victory at the end of May, he achieved a double kill on 8 July while leading a four-ship of Phantoms protecting a large strike force as it egressed the target area near Hanoi. “Steve ” Ritchie downed his fifth MiG on 28 August 1972, making him the only American pilot to down five MiG-21s–North Vietnam’s most sophisticated fighter aircraft. After returning from Southeast Asia, he received the MacKay Trophy for the “Most Meritorious Flight of 1972.”

During his two combat tours, Ritchie accumulated 800 hours of combat time during 339 missions, and was awarded the Air Force Cross, 4 Silver Stars, and 10 Distinguished Flying Crosses and 25 Air Medals. He resigned his commission in 1974 to run for the U.S. Congress from North Carolina at the urging of then Senator Barry Goldwater. Following his unsuccessful bid for the U. S. Congress, he continued military service with the Colorado Air National Guard and pursued several civilian business opportunities and served in the Reagan Administration as Director of the Office of Child Support Enforcement, Department of Health & Human Services in Washington, DC. In 1985 he moved to the USAF Reserves, and was promoted to brigadier general in 1994 becoming mobilization assistant to the Commander, Air Force Recruiting Service. In this capacity his inspiring words to over 2500 audiences bolstered recruiting efforts. Brigadier General Ritchie retired from the USAFR in January 1999, but continues to fly the only privately-owned F-4 around the country recruiting for the Air Force.  Brigadier General Ritchie was selected as an inaugural eagle of the Air Command and Staff College’s Gathering of Eagles in 1985 and subsequently honored in 2001.

"Protect the Force, Get the Pictures, and Kill MiGs" was the mission of the 432d Tactical Fighter Reconnaissance Wing. On 8 July 1972, "Steve" Ritchie did just that when he led a flight of four Phantoms flying MIGCAP in support of a Linebacker I strike near Hanoi and engaged two MiG-21s in trail formation. After meeting the trailing MiG head-on, he began a series of aerial maneuvers and launched two Sparrow missiles. The first missile exploded in the center of the MiG's fuselage, while the second AIM-7 Sparrow passed through the fireball. Hearing a call for assistance from his "number four," Ritchie extended to gain airspeed, made a 6 1/2-G slicing turn, and reentered the aerial dogfight just as the remaining MiG was maneuvering to attack his wingman. Instead, the enemy aircraft disintegrated when Ritchie fired an AIM-7 missile and scored a direct hit. These were his third and fourth victories on his way to becoming the US Air Force's only pilot ace in Vietnam.

On 28 August 1972, "Steve" Ritchie leading Buick Flight of four F-4Ds, was providing MIGCAP for a strike package North of Hanoi. After a short period of calm came the warning "bandits" approaching from the southwest. Just minutes later, Ritchie was able to acquire the "Blue Bandits" (MiG-21s) and close in on them: "I got 'em, I got 'em - Buick has a Tally Ho!" Ritchie shouted as the MiG crossed from right to left. Ritchie was able to convert and "splash" his fifth MiG-21 making him the only USAF pilot Ace of the Vietnam War.