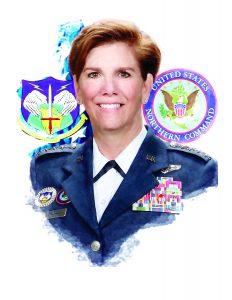 General Lori J. Robinson has the unique distinction of not only being the first female service member to lead a Unified Combatant Command, but she is also the highest ranking woman and Air Battle Manager in the history of the United States military. General Robinson is a true inspiration to men and women in and out of the military. Not just because she is a four star general who has broken military barriers, but because she is a leader. A leader who takes care of her people. A leader who gets out of her comfort zone. A leader who understands every person has something to contribute. A leader who knows it’s not about her, it’s about the institution. General Lori J. Robinson is a leader who you want on the radio when you go to war.

General Robinson was born on January 27, 1959 in Big Springs, Texas, and is the oldest of five children. With a father that spent 30 years in the service of his country in the United States Air Force, the general was no stranger to the sacrifices made by military members and their families. General Robinson attended the University of New Hampshire where she graduated in 1981 with a Bachelor of Arts degree in English. She began her military career as an Air Battle Manager in 1982 after receiving her commission from the Air Force Reserve Officer Training Corps program. Upon commission, General Robinson attended the Air Weapons Controller School at Tyndall Air Force Base,Florida. Over the next four years, General Robinson had a number of assignments where she grew to become an experienced tactician before heading to her most formative assignment as a distinguished graduate and instructor at the United States Air Force Weapons School at Nellis Air Force Base, Nevada. From there, the general had the opportunity to serve in a variety of operational and staff assignments while earning a Master of Arts degree in Leadership and Management from Troy University and a Master of Arts degree in National Security and Strategic Studies from the College of Naval Command and Staff.

General Robinson has commanded an operations group, a training wing, an air control wing, and deployed as Vice Commander of the 405th
Air Expeditionary Wing, where she led more than 2,000 Airmen flying the B-1 Lancer, the KC-135 Stratotanker, and the E-3 Sentry aircraft in operations ENDURING and IRAQI FREEDOM. The general was also an Air Force Fellow at The Brookings Institution in Washington, D.C., and served at the Pentagon as Director of the Secretary of the Air Force and Chief of Staff of the Air Force Executive Action Group. In 2008, General Robinson pinned on brigadier general, becoming the first Air Battle Manager to earn a star. After entering the general officer ranks, she went on to serve on the Joint Staff as the Deputy Director for Force Application and Support in the Directorate of Force Structure, Resources, and Assessment at the Pentagon prior to becoming the Air Force’s conduit to Congress as the Director of the Legislative Liaison Office, Office of the Secretary of the Air Force.

General Robinson also served as the Deputy Commander of U.S. Air Forces Central Command and the Deputy Combined Force Air Component Commander at U.S. Central Command, Southwest Asia, prior to becoming the Vice Commander at Air Combat Command at Langley Air Force Base,
Virginia. General Robinson set yet another milestone when she became the first female general to command combat forces as the Commander of Pacific Air Forces and the Air Component Commander for U.S. Pacific Command. In 2016, she was appointed as the Commander of North American Aerospace Defense Command and US Northern Command, making her the first female unified combatant commander, and the highest-ranking female in United States military history.