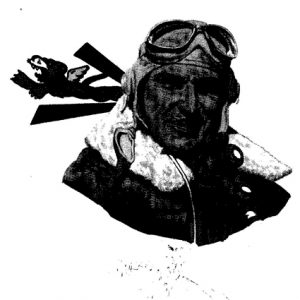 Joe Rosbert shared in the destruction of four Japanese bombers during his first aerial engagement. Born in January 1917, Rosbert grew up in south Philadelphia. An outstanding student, he won a scholarship to Villanova College where he earned a degree in chemical engineering in 1938. Excited by naval aviation, he enlisted as a seaman second class and began basic aviation training in the Boeing N3N Kaydet. He and one classmate were successful and moved on to NAS Pensacola, Florida. In April 1940, Admiral A. C. Read, who had made the first successful trans-Atlantic flight, pinned wings on Rosbert. He then checked out in the Consolidated PBY Catalina and became a patrol plane commander.

Seeking new adventure during the summer of 1941, Rosbert resigned his commission and volunteered to fight for China. In late September, he sailed on a Dutch ship as leader of 35 young Americans. In mid-November, the group arrived in Burma and within a few days, Rosbert was assigned to the 1st Pursuit Squadron and began to fly the Curtiss P-40B Tomahawk. On 18 December, the 1st and 2nd Squadrons flew to China, and just two days later, the AVG (American Volunteer Group) engaged the enemy. A group of 15 Tomahawks attacked 10 Japanese bombers headed for Kunming. In the melee, four bombers were downed and each AVG pilot was awarded 4/15th -victory credit. In late December, the Japanese began attacks on Rangoon. Rosbert “chafed at the bit ” to get into the thick of the battle.

Flying out of Rangoon on 25 and 26 February, he shot down at least four Nakajima Ki-27 fighters and destroyed two more on the ground. When Burma fell, the AVG returned to China where Rosbert shot down two more aircraft in mid-June. The AVG disbanded on 4 July 1942 and Rosbert joined the China National Aviation Corporation to fly supplies over the Himalayas. Crossing the “Hump” in April 1943, his Douglas transport iced up and crashed into a high snowfield. Rosbert and his copilot survived a week of relentless storms, then trekked down the mountains. Later, natives helped them contact a British patrol with a doctor. After 46 days, the two pilots returned to their base. In mid-1945, after recovering from extensive ankle surgery, Rosbert helped found the Flying Tiger Line. In 1947, he returned to China and flew for Civil Air Transport (CAT).

Rosbert flew with CAT until 1957 and served as Claire Chennault’s vice president. He and his wife “Lil” soon moved to Spain, bought a castle, and turned it into a resort, the Hotel Son Vida. After 10 years in Spain, they opened Tiger Joe’s Gourmet Restaurant in North Carolina. Rosbert is the author of Flying Tiger Joe’s Adventure Story Cookbook and The Pictorial History of Civil Air Transport and now lives with his wife near New Orleans.