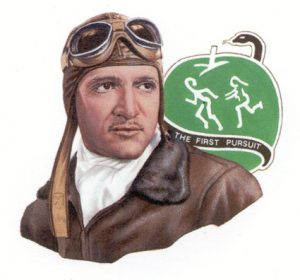 Dick Rossi, an ace with six victories as a “Flying Tiger,” also flew 735 transport missions as a “Hump” pilot! Rossi was born in April 1915 in Placerville, California, and went to high school in San Francisco. During his university years he often sailed in the Merchant Marines during school breaks. In 1938, while working on a liner, the President Garfield, Rossi met two Navy officers who encouraged his desire to become a naval aviator. In early 1939, armed with their recommendations, he applied to the Navy. He made it through “elimination training” and in January 1940 began flight training at NAS Pensacola, Florida. He earned his wings and commission and then became an instructor.

In 1941, Rossi signed a one-year contract with Central Aircraft Manufacturing Company, then covertly recruiting American volunteers to fly and fight in China. He resigned his commission with a promise it would be reinstated, and in late September boarded the MS Boschfontein bound for the Far East. He arrived in Burma in mid-November and within a few days became a member of the 1st Pursuit Squadron of the AVG (American Volunteer Group). It was ” quite an experience” when Rossi took to the air in a Curtiss P-40 Tomahawk . He had about 10 hours flying in the Tomahawk when the Japanese attacked throughout the Pacific. Rossi had 11 hours “dogfighting” practice before his squadron moved to China. The Japanese chose to leave Kunming alone for a while and eight Tomahawks were sent back to Burma.

On takeoff, Rossi aborted. Later flying alone, he ran into strong headwinds. As his fuel dwindled he luckily spotted a crude landing strip. A British engineer provided Rossi fuel and a “shot of scotch” before he headed to Rangoon. On 19 January 1942, Rossi had his first real dogfight. Nine days later, in a big air battle, he shot down his first enemy fighter, a Nakajima Nate. As the Japanese moved troops steadily into Burma, pilots of the 1st Pursuit Squadron fought valiantly. On 25 and 26 February, Rossi shot down four Nates and flamed two on the ground. Also, on the 26th, at 20 feet above the water and with all six guns blazing, he attacked a boat carrying enemy troops. In late April, Rossi was ordered back to Kunming.

On 12 June, he scored his final victory before the AVG disbanded. Rossi, and 16 other “Flying Tigers,” signed on with China National Aviation Corporation. He flew grueling missions through the Himalayas from India to China. At wars end, he had flown 735 trips to supply the allies. He then became a founding partner in Flying Tiger Airlines, and flew as a captain for 25 years-he logged over 25,000 hours. Now retired in southern California with his wife, Lydia, Rossi is active as the Flying Tiger Association President.