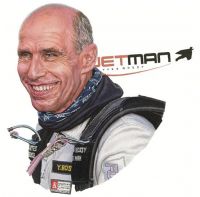 Yves “Jetman” Rossy is a pilot, innovator, and aviation enthusiast who is expanding the possibility of human flight. In November 2006, Rossy became the first person in the history of aviation to fly with a jet-propelled wing. The Jetman, as he is now universally known, has since completed several more daring flights all around the world. Serving as both the pilot and the human fuselage, he flies freely through the air, steering with the slightest movements of his body before parachuting back to Earth. Rossy was born on August 27th, 1959 in Switzerland. When he was thirteen years old, he attended an airshow and saw a Swiss Air Force aerobatic flying team demonstration that left a permanent impression on him. At that moment, he began to dream of flying like a bird.

In 1976, Rossy joined the Swiss Air Force earning his wings just four years later. He spent seventeen years as a Swiss fighter pilot behind the controls of Hawker Hunters, Northrop F-5 Tiger IIs, and Dassault Mirage IIIs. After retiring from the military, he flew commercially as a captain for Swissair and later Swiss International Air Lines, piloting Boeing 747s and Airbus A320s. Rossy dedicates his free time to flight and experiments with all its forms.

His dream, however, was to fly in the most natural way possible by replacing the complicated aircraft structure and control surfaces with his own body. Drawn into the world of free fall and aerial acrobatics, Rossy experimented with sky surfing and wingsuit flying in an attempt to prolong his time in the air, control his trajectory, and eventually transform a fall into a flight. Still not satisfied, he developed his first real wing made of a rigid harness and inflatable wing panels in the garage of his Swiss home in 2002. The next step was to gain total freedom by making the whole wing rigid and adding four model airplane jet engines. After several more years of designing, engineering, and testing new wings, Rossy finally realized a lifelong dream. In November 2006, he leapt out of a small plane and flew with his first jet-powered wing for five minutes and forty seconds over Bex, Switzerland. Since then, the Jetman completed flights across the English Channel (2008), over the Swiss Alps (2008), through the Grand Canyon (2011), around Mount Fuji (2013), and even in formation alongside other aircraft, including supersonic jets.

His achievements include the Académie des Sports Award for a remarkable and uncommon performance (2008), the Air League Award from His Royal Highness The Duke of Edinburgh (2009), the Faust A.G. Award for Adventurer of the Year (2009), and membership into the Society of Experimental Test Pilots (2009). Rossy devotes all his free time to his passion of flight. He is continually improving upon his designs with the vision of ground take-off and enhanced aerobatics.

Using his body as flight controls, Yves Rossy soars through the air with his six-foot carbon-kevlar wing strapped to his back. Powered by four jet engines, Jetman can reach speeds of 180 miles per hour during descent and can climb at a rate of 1080 feet per minute. The wings weigh 120 pounds with fuel and allow up to thirty minutes of flight time.