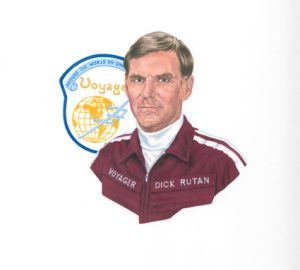 “Born with aviation fuel in his body instead of blood” is how Richard G. “Dick” Rutan’s mother describes her eldest son who would later co-pilot the first aircraft to circumnavigate the globe non-stop, without refueling. Rutan was born in 1938 in Loma Linda, California, and has loved aviation since he was a child. While in high school, he fell in love with the speed and power of the North American F-100 Super Sabre and got his pilot’s license on his 16th birthday. In 1958, he joined the US Air Force Aviation Cadet Program, became a second lieutenant, earned navigator wings, and was assigned to Iceland to fly the Northrop F-89 Scorpion.

He next flew the Douglas C-124 Globemaster and, after logging 1,900 hours as a navigator, entered pilot training. Rutan was the top graduate of his class at Laughlin AFB, Texas, and in 1967 fulfilled his dream to fly the F-100. He was soon sent to South Vietnam to fly ground attack missions, but quickly volunteered to become a forward air controller (FAC) in the Commando Sabre program. As a “Misty FAC,” he flew 325 F-100 missions over North Vietnam. Rutan was shot down midway through his third tour in 1968. Returning from Vietnam, he spent the next 10 years stationed in Europe and at Wright-Patterson AFB, Ohio, and Davis-Monthan AFB, Arizona. He retired in 1978 as a lieutenant colonel and began flight testing and demonstrating at air shows his brother’s high-performance home-built aircraft.

In 1980, he met Jeana Yeager and a year later, their dream of flying around the world began to take shape. They founded Voyager Aircraft, Inc. and, to raise money and generate publicity, Rutan set several aircraft speed and endurance records. In 1981, he set a distance record of 4,563 statute miles for an aircraft weighing less than 1,000 kilograms. The following year, he set a closed course speed record for both 500 and 2,000 kilometers. Rutan was awarded the 1982 Louis Blériot Medal for his aviation records. On 1 June 1984, after three years of work, Rutan soloed the Voyager on its maiden flight.

Then, on 14 December 1986, after two years refining the Voyager, Rutan and Yeager lifted off from Edwards AFB, California, on their epic flight. Nine days later, they returned to Edwards AFB to complete the first nonstop, unrefueled, around-the-world flight of 26,700 statute miles. Rutan was awarded a Presidential Citizens Medal, the Collier Trophy, the Order of Daedalians Distinguished Achievement Award, and was inducted into the National Aviation Hall of Fame in July 2002. Rutan became a governing member in the emerging space tourism industry when he was elected as a director of the East Kern Airport District in 2003, which has attained the status of Spaceport. In December 2005, Rutan set another world record for the longest distance in a ground launched rocket-powered aircraft, the EZ Rocket.  His flight from the Mojave Spaceport to the California City Airport, touted as the “shortest long distance flight,” is recognized by the National Aeronautics Association (NAA).  Lieutenant Colonel Rutan was selected as an inaugural eagle of the Air Command and Staff College’s Gathering of Eagles in 1988 and subsequently honored in 2003.

The Voyager is no ordinary aircraft. The airframe is made of a honeycomb composite shell, with two fuel-efficient engines mounted on the fuselage fore and aft. With a 110-foot wingspan, and a cockpit measuring 72 feet long by 2 feet wide, Voyager weighs only 1,850 pounds empty. Numerous improvements were made during flight tests; however, one aerodynamic flaw remained--speeds at 82 1/2 knots would tear the wings off. Despite the risks, Dick and Jeana departed Edwards AFB, California, early on 14 December 1986. On takeoff, Voyager's winglets were damaged and, once airborne, Dick had to shake off the damaged portions. For the first 3 days, they dodged a typhoon, overcame mechanical failure, and struggled with high fuel consumption, which threatened flight completion. Over Africa on day four, fuel problems eased, but sleep and oxygen deprivation made both pilots sick. Three days later, just north of Brazil, turbulence threw Voyager into a 90-degree bank, but Dick's quick reaction recovered the aircraft. In the final hours of the flight, the rear engine quit due to a bad fuel pump. As Voyager lost altitude, they diagnosed the problem, started to shutdown the front engine, and then successfully restarted the rear engine. Voyager landed at Edwards AFB on 23 December with 8.4 gallons of fuel to complete the first nonstop, unrefueled, around-the-world flight--a distance of 26,700 statute miles.

The Voyager is no ordinary aircraft. It has a 110-foot wingspan and weighs only 1,850 pounds. Despite the risks, Dick Rutan and Jeana Yeager left Edwards AFB on 14 December 1986. During their flight, they dodged a typhoon, overcame mechanical failure at take-off and a 90-degree bank caused by turbulence, and struggled with high fuel consumption, sleep and oxygen deprivation, and sickness. Then, in the flight's final hours, the rear engine quit. Even so, they were able to land Voyager back at Edwards AFB on 23 December with 8.4 gallons of fuel.