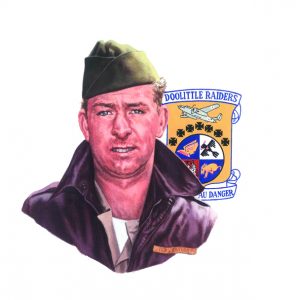 Ed Saylor was the flight engineer for crew #15 of the Doolittle Raiders when it carried out that historic bombing mission over Japan on 18 April 1942. Saylor was born in Brusett, Montana, on 15 March 1920. He enlisted in the Army Air Corps on 7 December 1939, at Fort George Wright, Washington. He was then assigned to the Air Corps Training School at Chanute Field, Illinois, to be a mechanic. Following training, Saylor served as a flight engineer at bases located in Washington, South Carolina, and Florida. In February 1942, while assigned to the 89th Bomb Squadron in Columbia, South Carolina, Saylor volunteered for a Top Secret mission, not knowing what the mission entailed. After being selected, Saylor and the other volunteers were sent to Florida for short take-off training.

Following training and still unaware of the mission, the men were sent to Alameda Naval Air Station where they boarded the USS Hornet aircraft carrier destined to an unknown location. After a few days at sea, the men were finally notified of their mission – take-off from the deck of the Hornet and bomb Tokyo, Japan. Just days before the mission was to be carried out, it was discovered Saylor’s B-25, #15, was inoperable due to an engine malfunction. If the engine could not be fixed, crew #15 would have to push their aircraft over the deck and not participate in the mission. Doolittle personally asked Saylor if he could fix the engine. Saylor said he would do his best considering this type of maintenance usually takes place at a depot. Without adequate maintenance facilities, Saylor was forced to dismantle, troubleshoot, repair, and reinstall the engine on the deck of the windy, pitching aircraft carrier. After discovering the engine keys had fallen out, Saylor successfully found them, reinstalled them, and rebuilt the engine, single-handedly ensuring all 16 original aircraft participated in that historic mission.

On the morning of 18 April 1942, the men of the Doolittle Raiders launched from the USS Hornet 250 miles earlier than planned after being spotted by a Japanese fishing vessel. Knowing they would not have enough fuel to reach their intended landing field in China, the crews planned to ditch or crash land their aircraft in China after striking their targets. After successfully dropping their payload on a large aircraft factory and dock yard in Kobe, Japan, Saylor’s crew ended up ditching their bomber in the waters near a small Chinese island off the coast. After riding the tide to shore on a life raft, the entire crew was rescued by Chinese fishermen who brought them to safety. Lieutenant Colonel Saylor served the remainder of the war in Europe and received a battlefield commission on 4 March 1945, while serving in Belgium. His decorations include the Distinguished Flying Cross, the Air Force Commendation Medal (2 Oak Leaf Clusters), and the Chinese Army, Navy, Air Corps Medal, Class A, 1st Grade. He retired from the United States Air Force as a Lieutenant Colonel on 1 October 1967, after 28 years of distinguished service.

On 18 April 1942, Ed Saylor and 79 other Doolittle Raiders successfully executed the first bombing mission against Japan during World War II. The mission was forced to launch 250 miles earlier than planned after being spotted by a Japanese fishing boat. Realizing the aircraft would not have enough fuel to make it to their intended landing site in China, all 16 crews had to ditch or crash land after bombing their targets. Some survived, some perished, and some were taken hostage...but all would be remembered for their heroism, selflessness, and dedication.