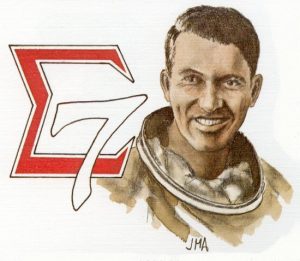 Walter Schirra was one of the original seven US astronauts and the only astronaut to fly in America’s first three manned space programs–Mercury, Gemini, and Apollo. Born in 1923, he had “aviation in his blood;” his father was a WW I fighter pilot and both his parents were “barn stormers” in the post-war era. After attending Newark College of Engineering for 2 years, he received an appointment to the US Naval Academy in 1942 and graduated 3 years later in one of the accelerated World War II classes. He first served aboard ships in the Pacific for 2 years, then returned to Florida for pilot training and earned his wings in 1948.

After flying Navy fighters for 3 years, he volunteered to serve during the Korean War as an exchange pilot with the 154th Fighter Bomber Squadron, a Texas-based Air National Guard unit. Schirra flew 90 combat missions in the F-84E, shot down two MiG-15s, and received the Distinguished Flying Cross. He later served as a test pilot at the Naval Weapons Center, China Lake where he took part in the initial development of the Sidewinder air-to-air missile and served as chief test pilot on the F7U Cutlass and the FJ3 Furyjet aircraft. Following a flying tour on the carrier Lexington and completion of Naval Air Safety School, he graduated in 1958 from the Naval test pilot school at Patuxent River, Maryland, and remained there to help develop the new F4H “Phantom” fighter.

In April 1959, “Wally” Schirra was selected for the astronaut program and, flying Sigma 7 in October 1962, became the fifth American in space. In December 1965, he commanded Gemini 6-A, which, after several mechanical problems, made the historic rendezvous with Gemini 7. This joint mission set five records, including the first formation flight of two space vehicles. Schirra finished his astronaut career in October 1968 by completing 163 earth orbits as Commander of Apollo 7, the first manned flight in NASA’s lunar landing program. Schirra is also a member of the Aerospace Hall of Fame and recipient of the Collier and the Harmon International Trophies. He retired from the US Navy and NASA in 1969.

On 3 October 1962, one day short of the fifth anniversary of the launch of Sputnik, Schirra flew a flawless mission in his Mercury spacecraft, named Sigma 7, and landed four miles from the carrier Kearsage. To conserve on-board fuel during his six orbits, he turned off the flight control system and allowed the spacecraft to freely drift for over one-third of the flight. His 9-hour mission lasted nearly twice as long as the previous Mercury flights and demonstrated it was feasible for America to put a man on the moon within the decade. President John Kennedy presented Schirra with the US Distinguished Service Medal and, with Mercury 9 astronaut Gordon Cooper, he received the Haley Astronautic Award in 1963.