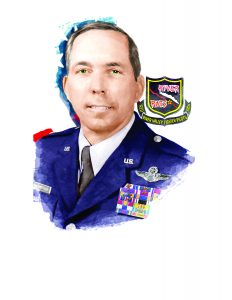 Lieutenant Colonel William R.Schwertfeger was born in Enid, Oklahoma 22 September 1945 and grew up near Medford, Oklahoma. He graduated from Oklahoma State University 30 June 1967 and was commissioned a Second Lieutenant in the U. S. Air Force through the Air Force ROTC Program.

He entered active duty 12 September 1967 and completed undergraduate Pilot Training at Vance U. S. Air Force Base, Oklahoma, in September 1968. His first and second combat assignments were in the 433rd Tactical Squadron at Ubon Royal Thai Air Force Base, Thailand August 1969-June 1970 and 1971. Both assignments supported operations in Vietnam. During his second tour he was handpicked as a Wolf Forward Air Controller, a selectively manned squadron of the best fighter pilots from each unit.

During his two tours in Vietnam as an F-4 pilot, he accumulated over 1,000 combat hours spanning 350.5 combat missions. On 16 February 1972, as the lead Wolf on a combat mission, he was forced to eject over North Vietnam after taking fire from a SAM. Lt Col Schwertfeger was held captive as a prisoner of war for 407 days until his release during Operation Homecoming on 28 March 1973.

After his release, Lt Col Schwertfeger continued his career in the United States Air Force. Following his recovery, he went on to serve as an F-4 fighter weapons instructor and maintenance liaison officer with the
414th Fighter Weapons Squadron at Nellis AFB, Nevada. He then served in Europe as an F-4 fighter weapons instructor with the U.S. Air Forces in Europe Tactical Employment School and the 406th Tactical Fighter Training Wing at Zaragoza AB, Spain.

During the early 1980s, Lt Col Schwertfeger transitioned to the F-15 Eagle and was stationed at the 49th Tactical Fighter Wing at Holloman AFB, New Mexico. Prior to his retirement, he served as the Air Force Advisor to the Kansas Air National Guard at McConnell AFB, Kansas, until retiring from the Air Force on 1 June 1988.

During his Air Force career, he logged over 3,500 flying hours in the F-4 and F-15. After retiring from the Air Force, Lt Col Schwertfeger went on to fly over 10,000 hours in the Boeing 727 with American Airlines before retiring in October 2005. He currently lives in Caldwell, Kansas with his wife Vonya and enjoys taking care of his collection of Corvettes.

Lt Col Schwertfeger was inducted into the Oklahoma Military Hall of Fame in 2013.