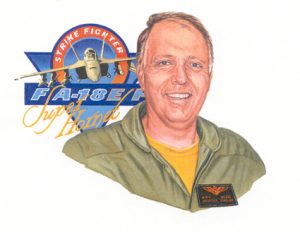 Mike Sears led 50,000 people who designed, produced, and supported military aircraft, missiles, and munitions to defend the United States and its allies around the globe. Sears was born in St.Louis, Missouri, in 1947 and, after high school, went to Purdue University in Indiana. He earned a bachelor’s degree in electrical engineering in January 1969 and, six months later, gained a master’s degree. Returning to his hometown, he began a career at McDonnell Douglas Aerospace as a senior engineer for avionics technology. He led development of the navigation and targeting system for the McDonnell Douglas F-15 Eagle and worked on the Advanced Tactical Fighter program. In 1987, Sears became chief program engineer for advanced F/A-18 studies. The Hornet would replace the Grumman A-6 Intruder as the Navy’s chief strike fighter.

In 1988, Sears took charge as program manager for F/A-18 new business development and, in 1990, stepped up to vice president and general manager for the New Products Division of McDonnell Douglas. From 1991 to 1994, Sears was responsible for the company’s largest tactical aircraft program. As vice president and general manager for the Super Hornet, the F/A-18 E/F project, he focused on innovation and partnerships and developed a model procurement program. From 1994 to 1996, Sears managed production of all F/A-18 Hornets. He received Aviation Week’s Laurel Award for his success in guiding the Super Hornet from concept development to flight test. He moved to California in 1996 as President, Douglas Aircraft Company, with 11,000 employees.

While Sears was at the helm of Douglas, company engineers began to work with Boeing on future widebody aircraft. In 1997, Purdue University selected Sears for its annual Outstanding Electrical Engineer Award, and the University of Missouri-Rolla recognized him with the Alumni Achievement Award. Also that year, he became President, McDonnell Douglas Aerospace, and, when the company merged with The Boeing Company, he was named President, McDonnell Aircraft and Missile Systems Division. The next year, the company restructured and Sears was named President, Military Aircraft and Missile Systems, and Senior Vice President, The Boeing Company.

He is an associate fellow with the American Institute of Aeronautics and Astronautics and, in 1998, received the organization’s Hap Arnold Award for excellence. Sears is active in many national and local civic organizations and is a vice president of the Naval Aviation Museum Foundation. In May 2000, Sears became Chief Financial Officer of Boeing. Currently a resident of St. Louis, Sears enjoys free time with his wife, Debbie, who he met at Purdue, and has two sons.

In the 1990s, the Navy had a program to develop an attack aircraft called the A-12. It was key to their mission, but it was extremely challenging technically and ran into cost and schedule problems. Naval aviation was at risk when it was cancelled. Sears was in the right spot at the right time and was asked to lead the program that would become critical, the F/A-18 Super Hornet. In late 1995, the first Super Hornet rolled out of the factory and now, after 7,000 hours of mishap-free flight tests, the aircraft is going to the fleet, on schedule and under cost!