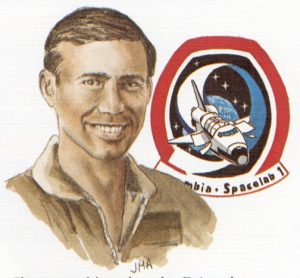 Lieutenant Colonel Brewster Shaw was the pilot for the STS-9 space shuttle mission, the shuttle’s first Spacelab flight. Born in May 1945, he received bachelor and master’s degrees in Engineering Mechanics from the University of Wisconsin before entering the Air Force in 1969. Following Officer Training School, he attended Undergraduate Pilot Training at Craig AFB, Alabama, finishing first in his class–a standing he would consistently achieve in his future flight training schools. From there, he completed F-100 Super Sabre training and was assigned to Phan Rang AB, Republic of Vietnam, where he flew only 17 combat missions before being stricken with hepatitis and returning to the US.

Following his recuperation, Shaw transitioned to the F-4 and returned to Southeast Asia in March 1972. During his second tour, he flew 233 air-to-ground and fast forward air controller missions in both the D and E models of the F-4 Phantom with the 8th Tactical Fighter Wing at Ubon RTAFB, Thailand. In his two tours, he logged 644 hours of combat and received the Distinguished Flying Cross with six clusters. He returned to George AFB as an F-4 instructor and remained there until July 1975 when he attended the USAF Test Pilot School at Edwards AFB, California. Shaw remained at Edwards and served as an operational test pilot and then as an instructor at the school.

As a test pilot, flying 30 different types of aircraft, he tested such systems as the F-4 digital weapons computer, and conducted a slatted F-4E high angle of attack engine stall/flameout program. Within 2 years, NASA selected him in the eighth group of astronauts and, following completion of a year-long training and evaluation period, he drew support assignments for early shuttle flights prior to the STS-9 mission in late 1983. NASA has designated Lieutenant Colonel Shaw, a contemporary of the Air Command and Staff College, Class of 1984, to command a shuttle mission scheduled for the first quarter of 1985.

STS-9 was the sixth and, at that time, longest flight of the shuttle Columbia into space. The shuttle "orbiter," about the size of a DC-9, was launched from the Kennedy Space Center in late November 1983 with experienced astronaut John Young as commander. Columbia carried a crew of six, including the first two non-astronaut scientists to ever go into space. Furthermore, one of the two, Dr. Ulf Merbold of West Germany, became the first European to fly in a US spacecraft. For the first time, the six crewmembers split into two teams to work around the clock during the shuttle's 10-day mission. Over 70 separate experiments were conducted in the Spacelab module, which had been developed by the European Space Agency as a totally reusable system to support virtually unlimited scientific experiments in the gravity-free, unfiltered, unobscured atmosphere of space. After completing 166 orbits of the earth, Columbia landed at Edwards AFB on 8 December 1983.