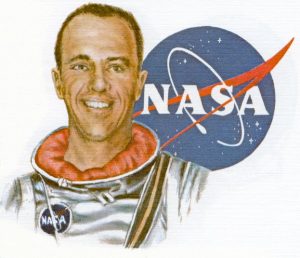 Alan Shepard was the first American in space and the fifth man to set foot on the moon. He received an appointment to the US Naval Academy in 1941, graduating 3 years later in an accelerated World War II class. Shepard first served aboard a destroyer, the USS Cogswell, because intended naval aviators were required to accomplish a tour aboard ship prior to flight training. In this capacity, he saw combat action in the Western Caroline Islands, Leyte Gulf, Luzon, Okinawa, and in the Third Fleet raids on Japan. He then returned to Texas and Florida for pilot training and received his wings in March 1947. Shepard then served as a fighter pilot with VF-41 in the Mediterranean prior to selection for test pilot duty.

While at Patuxent River, Maryland, he participated in high-altitude atmospheric tests, the Navy’s first in-flight refueling tests, initial trials of the first angled carrier deck, and flight tests for such aircraft as the Banshee, Tigercat, and Skylancer. During a short break from test pilot duty, Shepard served as operations officer for VF-193, a night-fighter squadron in the Pacific. Then, after attending Naval War College, he was selected as one of the first seven astronauts for Project Mercury–the United States’ first manned space program. After 2 years of intensive training, Shepard piloted the Mercury spacecraft, Freedom 7, through its first successful sub-orbital flight on 5 May 1961, signaling America’s first step towards the moon.

He remained with NASA and served as the Chief of the Astronaut Office until selected to command the Apollo XIV mission 10 years later. During this third manned mission to land on the lunar surface, he became the fifth man to set foot on and the only man to “play golf” on the moon. During this mission, he spent 33.5 hours exploring the rugged Fra Mauro region of the lunar highlands and obtained 96 pounds of lunar rock samples as well as invaluable test data. An inductee to the International Aerospace Hall of Fame and recipient of the Collier, Lambert, and Kincheloe Trophies, Rear Admiral Shepard retired from the US Navy and NASA in 1974.

On 5 May 1961, Alan Shepard made history when he became the first American in space. Less than a month after Cosmonaut Yuri Gargarin piloted Vostok I around the earth, the United States challenged the Soviet lead in the space race with the successful launch and recovery of Freedom 7. Boosted by a Redstone rocket, Shepard's flight of 15 minutes and 22 seconds climbed to a height of 116.5 miles, traveled 302 miles at a maximum speed of 5,180 mph, and gave NASA critical information in its quest to put the first man on the moon. On 6 December 1961, President John Kennedy presented Shepard with the NASA Distinguished Service Medal, and in a joint ceremony he and Virgil Grissom were awarded the first astronaut wings by their respective services.