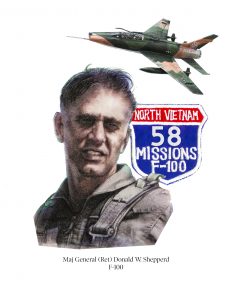 Maj Gen Donald W. Shepperd was born in San Antonio, TX in 1940 and graduated from the U.S. Air Force Academy in 1962. After graduation and pilot training, he was assigned to a fighter squadron in West Germany. After five years in the Air Force, Shepperd deployed to South Vietnam, where he eventually became a “Misty” F-100 fast jet forward air controller (FAC). Overall, Shepperd flew 247 combat missions in Southeast Asia and was hit 13 times; 58 of those missions were as a Misty pilot over North Vietnam.  In 1969, Shepperd left Active Duty and joined the Air National Guard in Pennsylvania. In 1974, Shepperd transferred to the Arizona Air National Guard, where he held positions including squadron commander, deputy group commander for operations, and vice wing commander. In 1987, Shepperd was appointed the commander of the 102nd Fighter Interceptor Wing at Otis Air National Guard Base, Massachusetts. After serving for two years, Shepperd was promoted to Brigadier General and appointed as the deputy director of the Air National Guard in the Pentagon. In 1994, Shepperd became Director (head) of the Air National Guard. In that capacity, he had oversight of 120,000 Air Guard members and 1,900 aircraft in more than 1,300 units through the United States, District of Columbia, Puerto Rico, Guam, and the Virgin Islands. During his tenure as Director, Shepperd helped transition the Guard from being a strategic reserve to an operational reserve partner to the Air Force. Maj Gen Shepperd retired from the Air National Guard on 1 Jan 1998. Since then, he founded a consulting company and was a commentator on CNN national news covering the wars in Iraq and Afghanistan. During his military career, Shepperd was a command pilot, having flown over 5,000 hours in the T-37, T-38,  F-100, T-33, A-37, A-7,  F-106, F-15, and C-21.  He is married with one son and four grandchildren, and resides in Tucson, AZ.