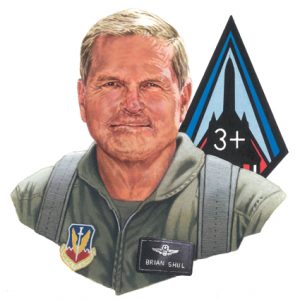 Brian Shul was born in Quantico, Virginia, in 1948. He graduated from East Carolina University in 1970 with a Bachelor’s Degree in history. Later that year he joined the Air Force and attended pilot training at Reese AFB, Texas. Following pilot training, he was assigned as a T-28 instructor pilot for foreign service officers at Keesler AFB. Two years later, in 1973, he was sent to Southeast Asia as a Foreign Air Advisor in the AT-28D at Udorn Royal Thai Air Base, Thailand. During the Vietnam conflict, Shul flew 212 covert close air support missions in Laos and Cambodia in conjunction with Air America. On 11 April 1974, near the end of hostilities, his aircraft was shot down near the Cambodian border. Unable to eject from the aircraft, Shul was forced to crash-land in the jungle. Although he miraculously survived the crash, he was severely burned in the ensuing fireball. After crawling from the burning wreckage, he was rescued by a Special Forces team and was evacuated to a military hospital in Okinawa where he was expected to die. After barely surviving two months of intensive care, and dropping from a healthy 176 pounds to a frail 119 pounds, he was transported for burn injury treatment to the Brooke Army Medical Center Institute of Surgical Research at Ft Sam Houston, Texas. During the following year, he underwent 15 major operations and countless hours of physical therapy. Doctors told him he was lucky to be alive, but he would never fly again. Shul would not settle for this diagnosis and his determination to return to the cockpit grew. He continued months of physical therapy, and only two days after his release from the hospital, he passed his flight physical and was returned to active flying duty. Shul then reported to Davis-Monthan AFB, Arizona, for A-7 training, followed by an operational assignment to Myrtle Beach AFB, South Carolina, with the 356th Green Demons. In 1977, after his squadron was designated as the first operational A-10 squadron, he became the 11th operational ready A-10 pilot in the Air Force, and a member of the first A-10 air show demonstration team. After a second tour in Arizona as an A-10 instructor pilot, he went on to instruct at the Air Force Fighter Lead-In School as the chief of air-to-ground academics, and an F-5B and AT-38B instructor pilot. For the final assignment in his career, Shul was selected to fly the the Air Force’s premier spy plane, the SR-71 Blackbird. This assignment required an astronaut type physical just to qualify. Once again, despite his previous injuries and against all odds, Shul passed the demanding physical, requiring no waivers. In 1986, while flying the Blackbird during the Libyan crisis, he provided key intelligence to President Reagan and was the only SR-71 pilot to have flown three missions in three days. His phenomenal comeback story from laying near dead in the jungle of Southeast Asia, to later flying the world’s fastest, highest flying jet, has been the subject of numerous magazine articles and an inspiration to many. After 20 years of experience in 12 different military aircraft and 5,000 hours in fighter jets, Shul retired from the Air Force in 1990. He went on to pursue his writing and photographic interests. In addition to running his own photo studio in northern California, he has authored five books on flying, for which he did all the writing and photography. For his superior achievements, Shul was named an Honorary Thunderbird, an Outstanding Alumni from East Carolina University, and received the Spirit of Freedom, Crystal Eagle, and Clifford Henderson Achievement awards.

In 1974, while conducting covert close air support missions in Laos and Cambodia, Lt Brian Shul was shot down. Unable to eject, Shul crash-landed his AT-28 aircraft in the jungle and was badly burned in the crash. Over one year and 15 surgeries later, he was able to pass a flight physical and return to the cockpit. Amazingly, he went on to fly the A-7D, A-10, F-5B, AT-38B, and finally the SR-71 Blackbird. His inspiring story is one of a lieutenant whose career nearly ended in the jungles of Southeast Asia, but through extraordinary determination, persevered to achieve another 16 years of aviation service to his great nation.