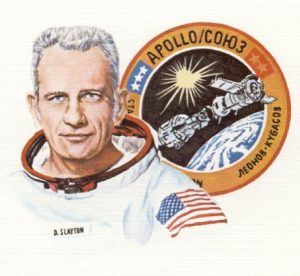 Donald K. “Deke” Slayton is one of America’s original seven astronauts. He was born in Sparta, Wisconsin, in 1924 and entered the Army Air Forces as an aviation cadet in 1942. He earned his wings and commission in April 1943 and was assigned to the 340th Bombardment Group, flying B-25s in Italy. He completed 56 combat missions, including the attack on the monastery atop Monte Cassino before returning to the States as a B-25 and A-26 instructor pilot at Columbia Field, South Carolina, in June 1944. In April 1945, he was assigned to the 319th Bombardment Group to fly A-26s from Kadena Field, Okinawa, where he flew seven missions against the Japanese home islands.

Slayton left the Army Air Force in 1946, entered the University of Minnesota, and graduated in 1949 with a Bachelor of Science degree in Aeronautical Engineering. He then became a design engineer for Boeing Aircraft Corporation and worked on such projects as the B-52 Stratofortress. He was soon recalled to active duty in the Minnesota Air National Guard to fly F-51s. In 1952, he went to Wiesbaden AB, Germany, as a headquarters inspector, and the following year returned to flying in the F-86F at Bitburg AB. In 1955, he returned to the States to attend the USAF Test Pilot School–an assignment that changed his life. At Edwards AFB he flew each of the Century Series aircraft then under development for the USAF. In 1959, he was selected for the astronaut program and was scheduled to pilot the Mercury-Atlas mission.

Unfortunately, due to a heart anomaly, he was taken off space flight status in 1962. Slayton then became NASA’s first Chief of the Astronaut Office and resigned his USAF commission in 1963 to assume the role of Director of Flight Crew Operations. In 1972, he was returned to full-flying status and was selected to pilot the Docking Module for the historic ASTP mission of 1975. Slayton, also a key member in America’s Space Shuttle program, managed both the approach and landing, and the orbital flight tests. He was responsible for the initial checkout of the flight controls and subsystems and extensive evaluations of the Shuttle’s subsonic flying qualities and performance capabilities.

These tests also verified the capability to ferry the craft aboard the Boeing 747. In 1982, Slayton left NASA and joined Space Services Incorporated of America, which launched the first privately owned commercial rocket. He is now president of the firm. Mr Slayton and his wife, Bobbie, live in Houston, Texas, the city that is the home of many of our nation’s newest pioneers.

"Deke" Slayton was the world's oldest rookie astronaut when a Saturn 1B rocket launched his Apollo spacecraft into orbit. After 4 years of extensive coordination and training, the Apollo-Soyuz Test Project (ASTP) crew of Stafford, Brand, and Slayton performed the intricate rendezvous maneuvers and docked with a Soviet Soyuz capsule 120 nautical miles above Earth. This historic flight included the first international docking of manned spacecraft and the transfer of astronauts between the spacecraft of two nations. The Apollo-Soyuz Test Project was the last of the Apollo series of launches and the last on which the Saturn 1B rocket boosted American astronauts into space.