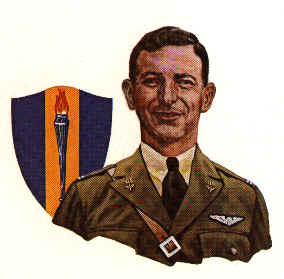 In a military career spanning 35 years, Lieutenant General Joseph Smith made many contributions to strategic bombardment, air transport, military education, and top-echelon planning. Graduating from the US Military Academy in 1923, he was assigned to the Eighth Cavalry at Fort Bliss, Texas. In 1928, he completed flying training at Kelly Field, Texas, with Claire Chennault as his final check pilot, and went to the Philippine Islands to fly the MB-1 bomber. Returning to Kelly Field, he became Commandant, Aviation Cadets. From March to May 1934, when the Army Air Corps was ordered to fly the Air Mail, Smith flew a variety of aircraft. Under the command of Lieutenant Colonel “Hap” Arnold, he braved the hazardous route over the Rockies from Salt Lake City, Utah to Cheyenne, Wyoming.

Back at Kelly Field, he became a flight commander in the 42nd Bombardment Squadron and then attended the Air Corps Tactical School. Assignments to a bombardment group, the Army’s Command and Staff School, and GHQ Air Force prepared him for the War Department’s General Staff where he served at the start of World War II. As the senior Air Force member of the Joint War Plans Committee for the Joint Chiefs of Staff, he traveled with President Franklin D. Roosevelt and senior military leaders to the Cairo Conference to refine Allied strategy for the war. Later, he was Chief of Staff for 20th Bomber Command in India and then served under General Jimmy Doolittle in the Eighth Air Force at Okinawa.

After the war, he helped establish Air University at Maxwell AFB, Alabama, and, in 1947, organized the Air Tactical School, forerunner of Squadron Officer School at Tyndall AFB, Florida. Assigned to Germany in 1948, General Curtis LeMay appointed Smith Commander of the Berlin Air Task Force to direct “Operation Vittles.” Within 1 month, his units were hauling over 2,100 tons daily to sustain Berlin against the Soviet blockade. A year later he returned to Headquarters USAF where he rose to the position of Director of Plans and Operations. In 1951, he took command of the Military Air Transport Service (MATS), and a year later was promoted to lieutenant general. He headed MATS for 7 crucial years. Under his leadership, the command met the challenges of the Korean War, the Suez Crisis, and the airlift of 14,000 refuges from the Hungarian Revolution. He served in this key position until his retirement on 30 June 1958.

March 1934 was cold in Utah and Wyoming, but it seemed even colder to Captain Joseph Smith, a young Army Air Corps pilot assigned to fly the mail. Open cockpits, bad weather, and crude instruments took their toll, and 12 pilots died in the effort, but Joseph Smith prevailed. Flying a Martin YB-10, he navigated over the treacherous, rugged terrain of the Rocky Mountains. This dramatic use of military airpower focused the nation's attention on the Air Corps' need for a modern, reliable, all-weather air force which would be needed as war clouds gathered around the world.