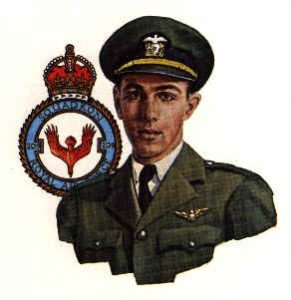 Imagine going to war while your country is at peace and having to keep it a secret. That was the situation for Missouri native “Tuck” Smith when he was awakened at 0300 on 28 March 1941, while aboard a seaplane tender in beautiful Acapulco Bay, Mexico. A University of Illinois graduate who had earned his wings of gold at Pensacola only 2 years before, he was notified of a request for “volunteers to go to England, observe Royal Air Force (RAF) Coastal Command, and check them out on the new Mk. 1 Catalinas (PBY-5As).” The skipper decided Smith was a “volunteer,” and he soon found himself listening to the Naval Chief of the Bureau of Aeronautics explain his secret mission.

Although the United States was officially neutral, President Roosevelt decided to aid the British in their war with Germany. One form of help was “Lend-Lease” Catalina flying boats for convoy escort duty. To maintain the appearance of neutrality, Smith and other USN pilots maintained the utmost secrecy. Posted to 209 Squadron in Lough Erne, North Ireland, he began flying missions within hours of his arrival. On 24 May, the German battleship, Bismarck, in a daring foray into the North Atlantic, sank the pride of the Royal Navy, the HMS Hood, and then disappeared. Prime Minister Winston Churchill responded by ordering an all-out effort to “SINK THE BISMARCK.” After over 7 hours of searching, Smith was the first to sight the quarry. In an epic chase, aircraft and ships of the Royal Navy sank the Bismarck.

Smith had helped give the British a much-needed victory that eliminated a serious threat to her convoy lifeline. Returning home, he was sent to Pearl Harbor on Thanksgiving Day 1941 for service in the Pacific. Within 2 weeks, Smith was at war again on detached patrol to Midway Island. While there, the Japanese shelled the island. Smith was in a hangar that took a direct hit, but he escaped injury. His squadron soon deployed to Perth, Australia, where he was based for much of the war. Doubling as Wing Operations Officer and a squadron pilot with normal flying responsibilities, he flew long-range patrols to protect General MacArthur’s flanks from Japanese naval operations. During the Korean War he was first, Staff Operations Officer, Fleet Airwing 10, and then Commanding Officer of Patrol Squadron 29, flying P2V Neptunes in one of the first electronic reconnaissance units.

The search was on...a lone RAF Catalina took off to search the vast lonely North Atlantic for an elusive and dangerous foe. On board was copilot, Ensign "Tuck" Smith, United States Navy--one of 17 Americans sent to help the British fly American Lend-Lease Catalinas. Breaking out of the clouds directly over the Bismarck, the aircraft came under intense antiaircraft fire. Shrapnel hit the plane's hull as it began jinking to escape into cloud cover, but the crew flew back for a second look and radioed the battleship's position to the British fleet. The next day, the Bismarck was sunk!