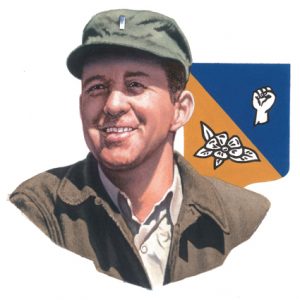 William Y. Smith is an inspiration of perseverance through adversity. Born on 13 August 1925 in Hot Springs, Arkansas, he was the first in his family (who were established in the legal profession) to pursue a military career. Smith graduated from the US Military Academy at West Point in June 1948. His class was the first to graduate commissioned officers into the newly established US Air Force, an opportunity which Smith took. Among the first USAF pilots to train in jet aircraft at Williams AFB, Arizona, he completed training and was assigned to fly the F-84D Thunderjet in the 55th Fighter Squadron at Shaw AFB, South Carolina. In June 1950, during the first US deployment of non-refuelable jet aircraft across the Atlantic, Smith flew to England along with B-29 and B-47 aircraft to prevent an anticipated Soviet attack on Europe. In March 1951, Smith was redeployed to Korea where he was attached to the 27th Fighter-Escort Wing at Itazuke Air Field in southern Japan. During his first 68 days, he flew 67 close air support, battlefield interdiction, armed reconnaissance, and other combat missions in the F-84E. After a two-month tour as a forward air controller with the 8th Army, Smith was assigned to the 49th Fighter Bomber Group at Taegu Air Field, Korea. On 2 February 1952, during his 97th mission, enemy anti-aircraft artillery struck Smith’s aircraft after he completed a visual attack on a rail-line near Sinanju, North Korea. The flack penetrated the cockpit and destroyed his right ankle and foot. After radioing that he had been hit, Smith’s wingman informed him that his aircraft was on fire. Remarkably, he piloted his damaged aircraft to a wheels-up landing on the China Sea mud flats in North Korea, and was later picked up by a rescue helicopter. Upon arrival at the Seoul hospital, doctors amputated Smith’s right foot and ankle. In addition, due to the stress and cold weather exposure, he came down with pneumonia which brought him again near death. Following nine months at various hospitals, and three semesters at Harvard University where he received a Master of Public Affairs degree (and ultimately a doctorate), Smith became an instructor and subsequently an associate professor at West Point. In June 1959, he also completed Air Command and Staff College at Maxwell AFB, Alabama. As a major, Smith worked for two years in Air Force Plans at HQ USAF before reporting to the White House as the Air Force staff assistant to Gen Maxwell D. Taylor, military representative to President Kennedy. When Gen Taylor became chairman of the Joint Chiefs of Staff (CJCS) in October 1962, Smith remained on his staff. During this time, Smith helped shape the US response to the Cuban Missile Crisis and the first successful nuclear arms control treaty. He subsequently worked at USAFE Plans, commanded the 603d Air Base Wing at Sembach AB, Germany, and served in the offices of the Secretary of the Air Force and the CJCS. He was promoted to the rank of general on 1 July 1979, and served his final assignments as chief of staff at SHAPE, and as deputy commander in chief, US European Command. Following his retirement, General Smith co-authored a book with Soviet General Anatoli I. Gribkov, Operation ANADYR, detailing the Cuban Missile Crisis from both the US and USSR perspectives. He also served for five years as president of the Institute for Defense Analyses, a federally funded research center, and as president of the Air Force Historical Foundation. He and his wife, Maria, live in Virginia. They have three sons and nine grandchildren.

Approaching the end of his deployment to the Korean War, General William Y. Smith's F-84E was hit by North Korean anti-aircraft artillery. Following a forced landing, and after dodging small arms fire from North Korean soldiers, he was recovered by UN forces. The injuries he sustained from the event could have been career ending, however, his dedication to service allowed him to persevere. His continued service allowed him to influence and shape US nuclear deterrence policies.